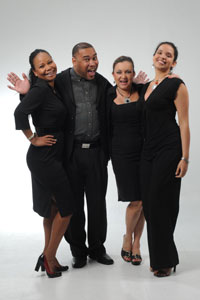 26 March, 2012 (PORT OF SPAIN, TRINIDAD): The resurgence of original local dramas continues as “Coming Home”, the hard-hitting drama written by award-winning Trinidadian playwright and actor Theresa Awai, gets its Queen’s Hall premiere this Thursday night, for one weekend only. The premiere is easily the most exciting theatrical event for true lovers of theatre since the premiere of Tony Hall’s “Miss Miles – the Woman of the World” last year.

This powerful, original drama assembles an award-winning ensemble of local actors on the Queen’s Hall stage. “Coming Home” – a provocative, funny and ultimately heart-warming new work inspired by a true story – lets us in on how one family’s decades’ old secrets, jealousies, and rivalries are uncovered when four strong-willed siblings battle over their deceased mother’s will. As the action unfolds, we find that blood is indeed thicker than water... until everyone reads their mother’s final will and testament.

Cacique Award-winning director and actor Raymond Choo Kong has pushed himself and his cast to dig deep for this challenging new work, giving audiences a rare opportunity to see some of Trinidad’s favourite performers – often best-known for their outstanding comedic skills – showing their dramatic range.

The action unfolds at the Queen’s Hall for one weekend only from Thursday 29 March through Sunday 1 April, with an opening night special where all tickets are just $100 each. Tickets Friday through Sunday are $150 general and $200 reserved seating, on sale at the Queen’s Hall Box Office 12pm–6pm daily, tel: (868) 624-1284. Showtimes are 8:30pm Thursday through Saturday, and 6:30pm on Sunday.

For more information about the production, additional ticketing outlets, behind-the-scenes photos, and much more, visit RCKP’s Facebook page at http://www.facebook.com/rckproductions; email raymondchookong@yahoo.com; or call (868) 384-8663 or (868) 320-8215.