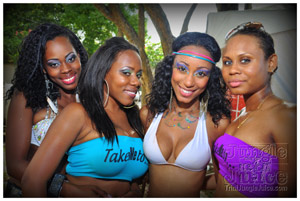 All the months in the gym and eating bush and water have led up to this moment where all your hard work goes on display for the world to see. Nothing should detract from this incomparable experience and TRIBE goes to great lengths to ensure that your every need is catered to so that your only concerns should be looking bess and having a time. This is why we are TRIBE loyalists.

Year after year we continue to be impressed with TRIBE’s efficiency and innovation when it comes to the bikini mas business and their ability to cater to their masqueraders wants and needs. C2k12 was no different. The high standard of service remained the same on both days with prompt service at the bar trucks and at the lunch stations, tight security, star line up of DJS, however it was the little things that wowed us more. 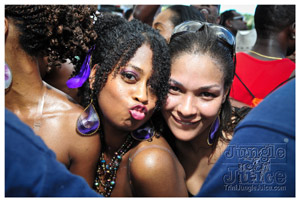 On Carnival Monday we were pleasantly surprised by the inclusion of official TRIBE sno cone men who provided us with sno cones spiked with a choice of Tequila or Puncheon, the perfect way to beat the heat and keep the party going! We were also grateful for the barrel men who met us on the track after the drink trucks left the band with chilled drinks in their portable barrels. Talk about bess service!

Of course the band would be nothing without its masqueraders and as always there was a great mix of sexy people of all ages, races, nationalities united by the love of having a ball! On Monday TRIBE masqueraders stormed the stage decked out in their custom Monday wear and released all their energy that had been pent up for a year!  We went crazy as Iwer George performed a live rendition of his 2k12 hit “No Pain”. It’s a good thing too because we all know by now about the unfortunate circumstances that resulted in the band not crossing the stage on Tuesday. We weren’t too upset as we aren’t that big on the stage but we felt it for those who missed out on their photo ops and the climactic euphoria of the main stage. 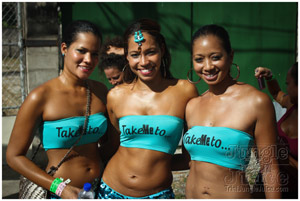 While Carnival Tuesday got off to a different start than anticipated, TRIBE kept moving, the drinks kept flowing and the masqueraders kept pumping. Good thing there were masseuses on hand at the rest stop to provide foot and full body rubs to those who had been chipping non-stop since 7:30 am. After lunch the party hit the road again carrying us on a different route that ended up at the new venue for the after party at the Police Barracks. We wined until the last note of the very last song, Kimba Sorzano’s “Over You” and will be eternally grateful to TRIBE for their part in making C2k12 besssss.