By Jo-Ann aka Karamel
Published on 09-Mar-12
It’s Friday night in NYC and the boys are back at it again….Shorblu Events and Big & Strong collaborated once again to bring Kes the Band & friends to the Best Buy Theater in Times Square to headline a ... 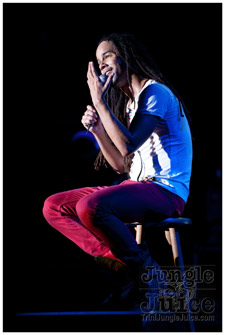 It’s Friday night in NYC and the boys are back at it again….Shorblu Events and Big & Strong collaborated once again to bring Kes the Band & friends to the Best Buy Theater in Times Square to headline a sold out show.  The post carnival energy was definitely in the air as the masses were now getting over their carnival tabanca so this was the perfect remedy for those carnival blues.  With a lineup of Kes, Benjai, Swappi, David Rudder and a few other guest artists, the crowd came prepared to fete.

Kes introduced the People’s Champion-Benjai who gave the crowd just want they wanted, hits from past and present.  However, when “People’s Champion” came on, everyone started singing every word and clearly we saw why Benjai has that title.

The tone was definitely set and it was only upward from this point on.  Kes came out and performed an extensive collection which included his hit that won him the groovy title “Wotless”  and continued with “Stress away”, “Come Over”, among others.  The highlight of Kes’s performance came when he performed “A Ting” and brought a fan onstage and both of them ended up on the floor , needless to say we all saw the video and for those that didn’t, well……. 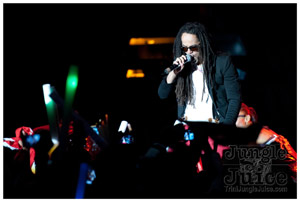 David Rudder came on during the second half of the show and gave a moving, soulful performance that reminded us of where soca came from and where it has the potential to go.  Mr. 4D-Swappi came out ready to entice the crowd because when “Bubble on a DJ” and “Bucket” came on, the crowd went MAD!!!!!!!!!!!!  The Best Buy Theatre was instantly turned inside out and the wotlessness ensued.  Kes came back out to close the show and to make sure we left wanting just a little more and before we knew it the show was over.

So you think that after the lights go on and people start filing out that the show is over right?  Well is now ting start, the acoustic self made rhythm section wanted more so they made their own show comprised of all the songs they did not hear during the night.  The highlight was “Miss Behave-Drop on the ground and roll” and actually seeing someone in the middle of the floor actually drop on the ground and roll.  Well when I say party start………………is now we ready for the after party.  Leaving the theatre who would we see arriving fashionably late but TJJ’s own Rammy!!!!!!!!!   Guess he missed the memo that 9pm show time does not mean the show is going to start @ 11pm lol.