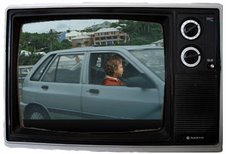 Ever notice the imbalance of looks on tv shows where the couple are the main characters?  Think about it, how often have you seen a couple on a show where both characters are hotta hot?  What's up with that?!  These shows will almost always have the woman as being the hot one and the man as the average looking one.  I think that people who have written for these shows were slightly nerdish maybe overweight boys who had an "I'll show them" attitude and cast according to their childhood dreams.


Example #1: "The King Of Queens" - Very large, roly poly man who isn't really attractive is married to a likkle very attractive smallie.
Example #2:  "The George Lopez Show" - George is married to a gorgeous fellow Latina.
Example #3:  "The Simpsons" - I will never understand why Homer and Marge got down.  You are beginning to get the idea...

Of course this isn't always the case.  There are shows where both parties are fug but it seems to have the reverse effect and ends up with fabulous ratings.  I'm sure there are sitcoms out there with great looking couples .... right? ... mmmm ... can you help me out with that?  But even so, I really wonder, why is the woman always hotter than the man and not the other way around?  Do you think this would hinder the success of the show?  Are we a society who even judges characters on TV by their cover?  My goodness, the cancellation of shows could be due to this phenomenon!  I'm beginning to think so because if Brad Pitt is in a film, I don't care what the plot is, I'm going to see it!