Loving mothers in May 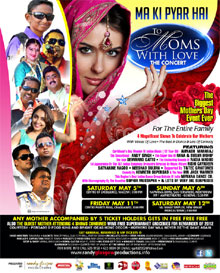 Fast rising 12-year-old singer, Avinash Maharaj once extended an open invitation to Prime Minister Kamla Persad-Bissessar to attend any event he was performing at. The student of Naparima College who lives in Penal looks up to the Prime Minister as one of his heroes and also a mentor.

Maharaj therefore hopes that Persad-Bissessar will accept his invitation to be there to see him perform when the nation’s mothers will be celebrated for two weekends in May as Randy Glasgow Productions presents a very special Mothers Day series of shows titled, Ma Ki Pyar Hai: To Moms with Love featuring top Indo-Trinidadian performers.

RGP is designing a show that will pay heartfelt tribute to mothers thanking them for everything they do for not only their children, but for the nation as a whole. The concert will not only feature performances by some of the most sought after singers and musicians on the island, but also top dancers and comedians making for a complete all round production.

Maharaj will deliver a very special performance through which he will make a musical statement against the abuse of children. The young man who became a household name with his hit song, “Dil Me Chupa,” will honour and thank mothers who protect their children against all harm and make sacrifices to ensure they grow up knowing God, being well taken care of, having respect for all people and with a good education.

Andy Singh is also preparing a repertoire of Bollywood, classical and chutney hits that will thrill everyone in the audience. The son of legendary singer, Ras Nancoo has performed with several bands including the Gayatones, D Rampersad Orchestra, Karma and SSL Melobugz Orchestra. He is regarded as one of the nation’s best Bollywood playback singers and has performed to sold out audiences worldwide.

Known as the Chutney Specialist, Devanand Gatoo will definitely warm the hearts of the mothers, grandmothers and others at Ma Ki Pyar Hai: To Moms with Love with his infectious traditional chutney songs. His list of hits includes; “Payaleeya,” “Maaro Maaro,” “Su Su Ki Dey” “Shake It Baby” and “Warm up.”

There will be a number of giveaways and specials on the night including a draw in which one lucky mother will receive $7,000 worth of groceries for the rest of the year from Persad’s the Food King. Also all mothers accompanied by five other ticket holders will receive one free ticket.

The series premieres on Saturday 5 May at the Centre of Excellence, Macoya and continues on Sunday 6 May at the Naparima Bowl, San Fernando. The concert will then move to the Centre Pointe Mall, Chaguanas on Friday 11 May and at Nu Image Simplex, New Grant on Saturday 12 May. For more information contact 628-9158.