Men of Soul And A Master Concert- The Biggest Event This Weekend, in Trinidad 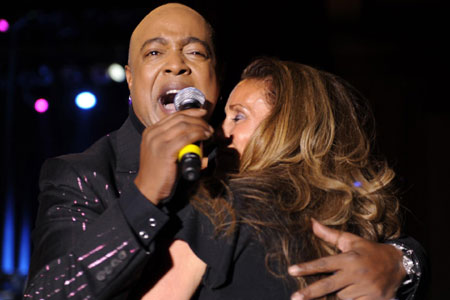 Photo:- Peabo Bryson and a fan

Port-of-Spain, Trinidad. April 25, 2012 -- James Ingram will be a part of the majestic cast of male entertainers who will take to the massive stage at the Queen’s Park Savannah this Saturday. The day is here and patrons have excitedly been vocalizing their anticipation to see and feel the impact of all the artistes- Jeffery Osborne, James Ingram, Freddie Jackson and Peabo Bryson at this weekend’s Men of Soul and a Master concert.

James Ingram, described as the master will likely woo the ladies with his countless hits. The Grammy award winner whose first solo single was recorded in 1982, has penetrated the musical world with his strong performances and not to mention his soothingly inviting tone. His singles include, Find One Hundred Ways, Always, Never Felt So Good and the 1987 gold-selling hit Somewhere Out There. In 1990, James Ingram appeared on Quincy Jones’ R&B mega-ballad, The Secret Garden and one year later he released his very own greatest hits disc entitled, The Power of Music. He released his fourth LP and continued performing individual singles throughout the 90’s and even today, his music stands strongly beside the greatest musical voices of the past two decades.

All of the artistes are set to truly impress the people of T&T this Saturday, this being a concert described by promoters and organisers as a showcase of love. For weeks the airwaves have been pumping the music of Ingram, Bryson, Jackson and Osborne and many are truly looking forward to a show they’ll never forget. This exactly, is the aim of organisers who are bent on making their patrons’ experience a positively enjoyable one. “ We know the artistes are ready and we know people have been talking about this show for the past month. It’s been a lot of work but finally the day is here and we’re going to show all of T&T what it means to provide a memorable concert experience for patrons,” said the head organiser for the event. He divulged that the special reserved section, which simply offers a closer view of the stage, had been almost sold out. “That just goes to show how excited most people are, to see these world renowned entertainers. This isn’t a little showcase of talent. This is a world class concert event that we’re working really hard on to ensure everyone walks away with a lasting memory of,” he said.

Peabo Bryson is thrilled to be coming to T&T. He is ready to deliver. Many would recall that Bryson’s vocals were featured in signature children’s movies, Beauty and the Beast and Alladin. He had collaborated with Celine Dion and Regina Belle with the singles Beauty and the Beast and A Whole New World, respectively, for the movies’ soundtracks. There is no doubt that his rendition of these singles in Trinidad will spark a level of nostalgia among both the mature and youthful on show night, as both tracks have lived on through the movies, which have undoubtedly been in the homes of most people with children.

Tickets for the show are said to be limited at this time and promoters anticipate an outpouring of ticket-seekers on show night as well. They are however advising patrons to secure tickets at the advertised outlets beforehand to avoid the possibility of tickets being sold out. “ This is going to be a show everyone will remember. It’s a love concert and anything that speaks of love is good,” said the organiser. He said it will be a show to take everyone’s breath away- one that the country will be talking about for weeks.