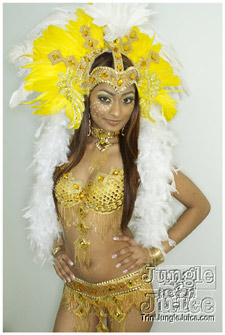 "One would think that it would be difficult to consistently come up with an award winning theme/costume design that would encourage seasoned masqueraders to remain loyal and at the same time entice others to jump ship and join your camp. This would be difficult for most unless you are renowned band leader, Louis Saldenah. For yet another year Mr. Saldenah has designed a beautiful array of costumes around the theme FANTASY JEWELS.

The designs would complement any body-type allowing for the full expression of the carnival spirit without feeling restricted while at the same time allowing you to maintain your dignity. This is NOT to suggest that it is NOT sexy....it most definitely IS...tastefully sexy.

The bejewelled fabric and coloured plumage of the head-pieces complement each other beautifully and, with assistance of the summer sun, the parade route is expected to look like a pirates treasure chest exploded. 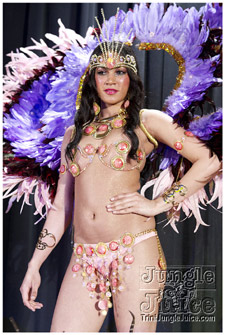 The Saldenah Mas K club band launch, or any event put on by them for that matter, always foster a family type atmosphere where Mr. Saldenah is extremely accessible and always willing to answer any question posed to him.

On behalf of all the Media photographers/videographers present I would like to express our collective appreciation for having a dedicated media pit to further our craft. All future band launches should use this as a template going forward as it would allow their work ,and that of the photographer/videographer ,to be showcased to the world in a professional manner without photographers/videographers having to jockey and settle for non- flattering positions with "uncle Gregory and he camera phone"

Dr. Jay did not disappoint both in the music provided as well as the CRYSTAL DREAMS sections he co-sponsored.

The event was a huge success and after the unveiling band leaders are definitely feeling the heat as Mr Saldenah has set the standard, both in presentation and design.