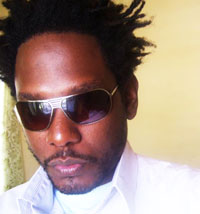 At the centre of all art is the spark that ignites within the artist. when it chooses to become manifest in reality, it may take the form of poetry, painting, music, sculpture, film or anything else the mind could dream up. Some choose to specialize in a particular medium of creative expression some need multiple outlets. On May 20th one such creative spirit, invites you to join him on his Urban Estate, at Martin’s Piano Bar, Upper Woodford Street, P.O.S., when he shares his own spark through art and music, sound and light.

According to Merriq, the Urban Estate is the heart and hearth of his current creative endeavours, the forge and the furnace as it were, where he fashions his new articles of artistry. Best known as a pioneer of the middle order of Rapso artists, (who flourished in the Kis skidee Karavan during the 90s), Merriq is clear to point out that this interest in the visual side of the arts (which also includes film making) is not a recent transformation.

“I have been into the visual arts since my teens” he reveals. They were part of the first group who took art to t-shirts and the streets, wearable art, art for the common man. He is currently dividing his time between putting together a new collection of paintings, adding colour and context to the pieces in the Reliquary, (the theme of his new collection) as well as rehearsing with his new band, also called the Urban Estate.

Merriq speaks of finding a new joy and freedom that has been missing in his musical life for a while. “Art is so refreshingly direct...you pour your soul into a piece, you show it, somebody likes and takes it home, or they walk away. Even the negative reactions are invigorating because the music industry has so many filters and gateways to pass through before somebody ever get as chance to dislike your music” About the name Reliquary he explains is all about iconography, about creating a series representing the imagery of the gods, tactile and visual symbols to represent our interactions with our spiritual power source. “I felt I had to work on that first, like an opening prayer in paintings” Merriq has not however abandoned his musical roots but he insists that the time has come for a major transplant.

“Who Killed Rapso” is the name of a mix tape he is currently working on, which he is reluctant to talk about. “The album itself will be my first statement” He says, “As for right now I prefer to concentrate on the positive and the future, like my live show and tour called A Beautiful Place. Live and Direct from the Urban Estate, from Trinidad and Tobago and from the Centre Season.”

Bringing to the vibes for just about two decades, Merriq has long been a flag bearer for all things indigenous, an avid aficionado of vintage calypso and the rich history and culture of our republic, he also DJays and produces music as the Flying Galvanize Disco. Most recently he has formed his own record label called Centre Season Records. “I am always writing and recording and I have a lot of new music to showcase on the 20th” he states. “This show is actually part of something called the Centre Season Sessions which runs for three months at different venues and also includes live streaming http://www.ustream.tv/channel/urbanestate.”

You can contact the hotline 376-8629 for information on venues, dates and tickets as well as joining the event and the group on facebook, keyword: the urban estate. The first event at Martin’s, which also features performances by Super Blue, Black Dragons Society and Janique Dennis, begins at 7pm and advance tickets are $100.00.