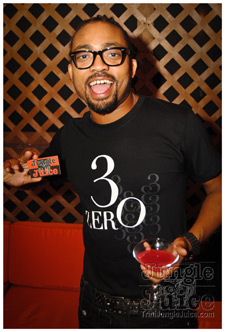 I love meh rum and meh rum it love me! What an amazing night! This event marked the launch of 3 Zero Thursdays where Coco Lounge will have drink specials on 3 Zero cocktails each and every Thursday. And what a way to kick this off! Machel Montano took the liberty of using this event to officially launch the music video for his song "Bottle of Rum". He also gave and electrifying performance alongside his chutney counterpart KI, Mr. Single Forever. Everyone's head was nice with the two-for-one specials on 3Zero cocktails, and as usual with Coco Lounge, the vibes start early and doesn't finish until closing time. Next week, find yourself there to see what's in store at the next 3 Zero Thursday!

I'd also like to give a big shout out to the Chameleon Crew for never disappointing and a very special Happy Birthday to Daina Felix, Coco Lounge's sweetheart of a bartender!