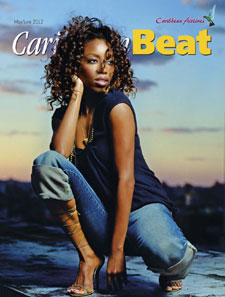 FRIDAY 4 MAY, 2012 (PORT OF SPAIN): Continuing its 20th anniversary celebrations, Caribbean Beat – the bimonthly inflight magazine of both Caribbean Airlines and Air Jamaica – launched its 115th (May/June 2012) issue on 1st May, featuring the dynamic Heather Headley. The Grammy and Tony Award-winning star makes her West End debut this November/December when the musical adaptation of The Bodyguard premieres in London.

Caribbean Beat is also launching its inaugural Readers' Choice Awards, celebrating the best that Caribbean Airlines’ and Air Jamaica’s destinations have to offer. It gives Caribbean Beat readers around the world the chance to vote for their Caribbean and diaspora favourites in a number of categories. Nominations are currently open, and can be submitted via the Caribbean Beat website at http://www.caribbean-beat.com.

This issue's cover story is on Heather Headley, who is not only preparing for a new album, but also to take the stage as Rachel Marron (the role the late Whitney Houston made famous) in the West End premiere of The Bodyguard in London…will an Oscar – or an Olivier – be next? Caroline Taylor asked her. A full transcript of their interview with Heather Headley is also published in Beat's sister publication, Discover Trinidad & Tobago.

There is great diversity as always in this issue's feature stories, covering the Caribbean and its diaspora. In Caribbean Beat’s home base of Trinidad, Cedriann Martin talks to author Roslyn Carrington about her nom-de-plume Simona Taylor, who writes steamy romance novels. Kari Cobham also features Patrice Grell Yursik (Afrobella – the Trinidad-born blogger who is on Ebony magazine’s Power 100 list). Nazma Muller pays tribute to Pat Bishop, a leading lady of the arts, who died nearly a year ago. And in an online-only exclusive, Caroline Taylor spoke to Caribbean Beat founding editor and publisher Jeremy Taylor about the magazine's first 20 years.

Further north in Grenada, Paul Crask visits the organic agri-tourism attraction Belmont Estate, while Antiguan Vanessa Hall – one of the most sought-after wedding photographers in the Caribbean – shares some of her spectacular photos with Bridget van Dongen.

In Jamaica, Nazma Muller explores Jamaican musician Seretse Small's big plans for Jamaica’s music industry. Two more Jamaican features include David Katz telling how the young Jimmy Cliff made his breakthrough, in an extract from his new biography of the singer; and Ian Stalker stumbles upon a pair of Jamaican dancers with a difference.

In the magazine's regular Departments, this issue's Happenings covers the most notable events in the region, while book and CD reviews round up some of the best recently released regional music and literature. For OWN WORDS and LIFE & TIMES, Dr Kumar Mahabir talks to Debbie Jacob about his cultural work, and Zahra Gordon profiles wedding blogger Simone Sant-Ghuran.

In their regular columns, Franka Philip grills away the London summer (CARIBBEAN COOKUP); Garry Steckles' enjoys an unpublished book about one of the original Wailers, Peter Tosh, and recalls one of his own encounters with the reggae star (RIDDEM & RHYME); and James Ferguson's ON THIS DAY column recalls an earlier 'invasion' – by the Royal Navy – into Havana, Cuba, which long preceded the current wave of tourists.

ABOUT CARIBBEAN BEAT
Caribbean Beat is published six times per year by MEP Publishers (Media & Editorial Projects Ltd) for Caribbean Airlines. Known as the magazine of the true Caribbean, it is the leading magazine on regional arts, culture, lifestyle and travel, and the most widely distributed magazine in the Caribbean. It is available on Caribbean Airlines planes, online, and via postal mail by subscription. For more, visit their website at http://www.caribbean-beat.com and Facebook page at http://www.facebook.com/caribbeanbeat.