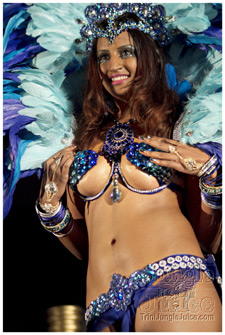 Toronto Revellers upon the announcement that the theme for their 2012 contribution would be BOLLYWOOD LIGHTS CAMERA ACTION, has intrigued a significant number of "carnival connoisseurs" who could not wait to see how this would be presented.

Jamaal Magloire and his team relieved our anticipation through a very theatrical unveiling at the Armenian Community Centre.

The theme successfully depicted a cross-pollination and fusion of cultures highlighting the rich and colourful traditions depicted not just in the BOLLYWOOD movies but those practiced in the West Indies.
While it is has been slowly evolving  and has come a LONG way, BOLLYWOOD has been known for its conservative and modest attire and one wondered how this would mesh with the "bikini and beads....two piece and fries" type costumes that we have grown accustomed to.

Toronto Revellers scored full marks for maintaing the authenticity of the traditional garments while at the same time adding that touch of sensuality that IS Caribbean Carnival.

A lot of detail has been paid to the male sections who for years have been reduced to mere props by a lot of mas camps. It is indeed a welcomed refreshing change and we hope that it is not a one-off deal.

Toronto Revellers has indeed taken a bold step in their 2012 offering and the writer applauds their vision. If you have not committed to any camp yet or looking for a change in costume design Toronto Revellers is definitely worth checking out.