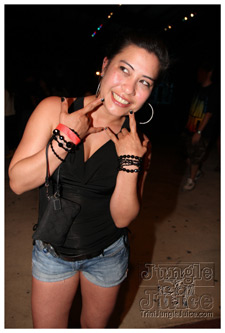 It's Carnival weekend in Cayman, so the first thing everyone thought was, "Why a reggae concert smack in the middle of everything (Soca)?" Well last year, The Wailers Concert (see coverage) took place on the Friday evening at the Royal Watler Terminal and turned out to be an enjoyable event. So why not!

When we got wind that Jamaican Reggae legend BARRINGTON LEVY was going to be performing at the Lions Centre, we didn't think twice about attending. However, we were concerned about the time, as the concert was scheduled to end at 3AM as opposed to 11PM last year, which meant 3 Friday night events over lapping in lil' Cayman!

We arrived shortly after 10PM, and to our surprise, the venue was empty... we're talking less than 10 people empty! The Lions Centre is a pretty huge venue, and definitely didn't offer the same ambience (i.e. water front) as the Royal Watler Terminal. The venue was also a little out of the way for tourists and non-locals in search for some reggae entertainment to easily stumble across.

Inside you had main and VIP sections, whereby VIP patrons had the luxury of an open bar and a sectioned-off area stage front. The sound system was cranked up by DJ Super C with some early warm reggae tunes, including some Super C dup plates of course. Patrons slowly trickled in, but nowhere close in numbers to fill out even half of the venue.

With 2 other Soca events taking place, we decided to pack it in around 11:30PM and head over to Cardinal Ave for the Batabano Street Fete featuring Alison Hinds, Blood & Oscar B before making way to Swanky's Jouvert Fete. So unfortunately we missed Barrington, but later got word that he gave a truly amazing, intimate performance.