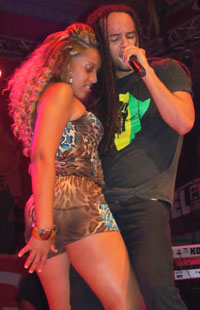 Phillipsburg, St.Maarten (Sonique Solutions) – Just days before its annual Carnival celebration, the beautiful island of St. Maarten was set ablaze by a fiery contingent of talented international musical acts. Adding to the melting pot of this year’s festivities was regional crowd pleaser Kes The Band which headlined the highly anticipated “1 Red Nation” concert at the Carnival Village in the capital of Phillipsburg.

The Carnival Village was bustling with energy and expectation for the performance by the Trinidad and Tobago based Soca ensemble. Calypso and Soca fans as well as live show enthusiasts alike lined the front of the stage from early in order to gain the best vantage point for absorbing each detail of the famed Caribbean crossover band’s appearance.

Much to the delight of the audience, Kes The Band led by frontline vocalist and 2011 International Groovy Soca Monarch Kees Dieffenthaller with his team of talented musicians hit the St. Maarten stage with high impact. The band delivered a diverse set which satisfied the many musical cravings of the massive crowd which consisted of local party goers, visitors to the island and even international celebrities and foreign media personnel.

Kes’ high-powered St. Maarten performance included all of the band’s original hit songs such as “Where Yuh From”, “Right Dey”, “Thunder”, the Carnival 2012 smashes “Coming Over”, “Play Ah Mas” and “Stress Away” and the ever popular “Wotless” (a tune which the St. Maarten crowd sang word for word). Kes also offered music selections for all age groups and musical tastes. 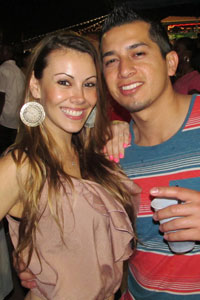 The energetic Carnival Village attendees exclaimed in delight as the band displayed true versatility. The appreciative audience sang along in unison as Kes performed everything from classics by Calypso legends such as Super Blue and David Rudder to modern day popular hits by Pitbull, Usher, Chris Brown and Vybz Kartel.

Sharing the stage with Kes at the “1 Red Nation” were Jamaican Reggae artistes Popcaan and Chris Martin who was joined onstage by Dancehall Diva Cecile.

Given the pure energy and positive vibrations of that night’s atmosphere (both on the stage and in the crowd), it is indeed evident that as much as the patrons were excited to see these performers, the artistes themselves were obviously enthusiastic about being in St. Maarten for Carnival to entertain these eager fans.