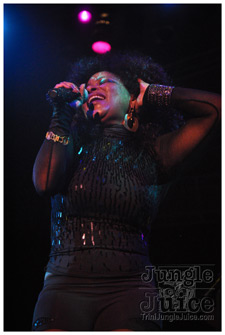 Now tell me, what do you get when you mix soul with soca? Mix funk with finess? Or mix beauty with bachannal? The result is an everlasting and memorable time. Nu Wave mixed this concoction for all mother's during the mother's day weekend and brought forward a concert that every mother and every woman by extension would have never forget. The title being Every Woman.

Like I asked earlier about putting together a concoction, in order to do so one must have chefs who specialized in their respected fields. Let's start of with our local soca. Soca, finess and bachannal all mixed in one....sounds like a King Chef can mix these things together. A person who cud tantalize, educate as well as make both the young and mature feel to "mash up de place". Well, Nu Wave sent for royalty as they had none other than living legend, King David Michael Rudder as one of their featured performers. His performance as usual was filled with tunes that had you singing and dancing along to, reminiscing of the old days of Trinidad and Tobago when you use to wake up on a Saturday morning and tune into TV6 or TTT and see the "Madman's Rant" video and just laugh at the movements. Patrons all the way from Russia was in attendance, and confessed on the mic that this island of T&T is really a paradise.

Now in order to bring funk into this mix, Nu Wave had to go international. You know what they say, the older the wine the better the quality, so they went for one of the originators of soul music. So what's the sense of having a king if your not gonna invite a queen; the Queen of funk. None other than Chaka Khan. Honestly my jaw dropped when she came on stage, not only because of her being a ten time Grammy award winner, another living legend.....but she is 59 years old and still looks heavenly beautiful. Whatever is her secret, bless that a million times more.

Chaka entertained the crowd with her timeless music such as "Sweet Thing," "I'm Coming Ou"", "Through the wire", "I'm Every Woma"" and many many more. When patrons thought it was over, there was one more grand surprise. For the finale, she was joined on stage with the our local superstar Machel Montano and they sung "Ain't Nobody""

Nu Wave very much brought forward a great concert that i'm sure every woman and male that were there truly appreciated. Once again they brought across great quality in a small quantity. To all mother's we at TJJ would like to wish you all a Happy Mother's Day. The Jokey One has spoken. Never know where I'll be next