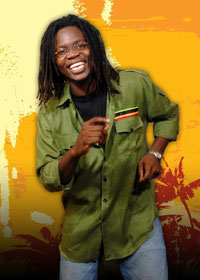 The Federation of St. Kitts-Nevis and the entire Caribbean music community is in shock as authorities on the twin-island n...ation have confirmed that popular Kittitian reggae artiste Masud Sadiki was found dead in his hometown of Old Road in St. Kitts.

It is reported that the 37-year-old performer was found hanging from a tree this afternoon (May 21) along a track upon which tourists are taken on conducted tours through the hills of Old Road.

Sadiki, whose real name was Kevin Donovan began singing and performing as a child but became a well-known stage performer during his days at the Basseterre High School where he performed at countless talent shows imitating Jamaican dancehall legend Shabba Ranks.

Donovan developed and matured as an artiste and shook the “Shabba Ranks” typecast and quickly became the most popular reggae entertainer in the Federation. Masud stamped his presence on the local entertainment scene with blistering, high energy performances at many local events and shows, which enabled him to share the stage with the likes of Buju Banton, Luciano, Morgan Heritage, Beres Hammond, Wyclef Jean, Culture, Lucky Dube, Gregory Isaacs, Junior Kelly, Everton Blender and many other reggae stars, many of whom influenced his music.

His first major hit was “Log Out” from his album Blast Off , which took him from being a household name in St. Kitts-Nevis to one of the most loved reggae performers in the Caribbean. In 2003 he released “Sun Down 2 Sun up” which featured hits such as “Reggae Run this Party”

His most recent release came in 2010 with “Keep it Down to Earth”. The album featured “Stitch in Time” which was written by Sadiki to support and bring awareness to the United Nations’ Secretary General’s “UNiTE To End Violence Against Women” campaign.

In an article published on Miyvue.com, Sadiki was quoted as saying “I love and respect women with all my heart and I am super happy to be lending my voice and energy to such a very serious and important campaign. My grandmother was stabbed to death in a supermarket in St. Croix, so violence against women has hit my family long before I was born. My Mom was just eight (8) years old.”

Masud’s intellect and leadership qualities were evident when he was named the District Manager for the National Emergency Management Agency in his community and when he was selected to represent the Federation on a study tour to Taiwan in 2001.

In 2010 Masud dove head first into the Calypso Arena and placed 2nd in the National Carnival King Competition. This past carnival in 2011 he was one of the highlights of the Sugar Mas Soca Monarch Competition where he placed 1st-runner-up in the Power Segment and 2nd runner up in the Groovy segment.

In an interview with ZIZ, international recording artiste Joan Amartrading had this to say about Sadiki: “Masud Sadiki’s energy is just brilliant. His whole way of being is great, his character is great, his connection with the people is great! I think he’s just great!”

Condolences have been pouring in for the much loved Kittitian icon:

Schoolmate and International Track Star Kim Collins said “My friend will be missed!!”

Leader of the Opposition People’s Action Movement in a statement said “Today I join the nation as we mourn the tremendous loss of an entertainer and a human being who was loved by ALL, Kevin "Masud Sadiki" Donovan. I will not only miss him personally as a friend but as an individual who gave much to the development of his community and his country.”

St.Kitts Soca Queen and fellow entertainer Shakki Starfire said “I am deeply saddened by the loss of a very dear friend Kevin "Masud Sadiki" Donovan. Words simply cannot express the sadness that i am feeling at this moment. Masud was such a loving, caring, warm person. This hurts!!...It really really hurts!!!"

5-time SKN Road March Champions the Small Axe Band issued a statement which said: “This is a very sad day for us. He was a pure beautiful and loving soul. A real friend of the band and good vibes all around. We are heart broken and shaken. Our prayers and thoughts are with his family, friends, community, the entire country and Caribbean region and internationally. His music and spirit touched so many. Until then our friend sing on.”

At news time officials have not declared whether any foul play is suspected.