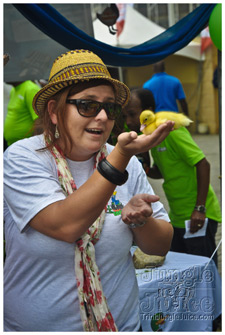 Precision Signs along with Hott 93 made it possible this year for there to be a IRON POT CURRY DUCK Experience  famly day experience to remember. St Johns courtyard was ram with family's , friends and of course.....IRON POTS. While most of the grown ups were “cooking the Duck” some of the kids were entertained by face painting and bouncy castles . It was very  hard concentrating because of the smell of curry which played on my taste buds in anticipation of tasting each of the 47 pots present. Of course the HOTT 93 dj Franco and Big George kept the crowd entertained with humor and music. I was jealous of Big George though because he got to sample all  the duck while I just helplessly looked on and took pictures.
The set up of the venue was excellent in terms of cleanliness and every tent was given enough space to prepare ‘their own Duck”.  While waiting on the curry ducks Kes “The Magician” made a guess appearance with some of his card tricks and even made and entire cigarette disappear with his hands. 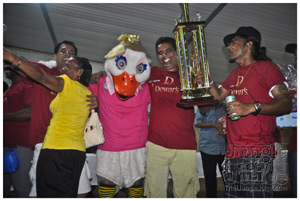 The time soon came when each company had to present his or her duck on the judging table to be judged to see who would turn out victorious. In my opion “Coco Lounge” , Peake’s and Movie Towne had some of the best layouts on display. While the judges calculated the results there was a beer drinking competition in which only women could enter, Coco Lounge were the eventual winners, I must admit however that those women could drink beers faster than most men I have seen.

Signs Liquor Mart were the eventual winners of the  IRON POT CURRY DUCK and they not only won themselves a trophy but also Ten Thousand Dollars (10,000.00) in cash and prizes. After came the performances in which  International Chutney Stars & Soca Super Stars came to perform, such as Rick Ramoutar from Fusion Factory, Omadath Maharaj and Swappi just to name a few. Swappi was the highlight performance to end the show singing some of his amazing hits like “ Bubble on a Dj” and “ Bucket”

I would like to say a special thanks to Precision Signs and Hott 93 for having Trini Jungle Juice present at there event and we hope to see them next year.