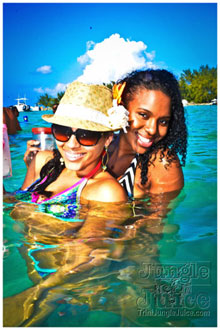 So after all the feteing and the mas on the road, a lil' rest and relaxation was just what the doctor ordered... Dr. Johnathan Walker MD!

CROWD:
Caymanians are a very chill people and when in Rome do like the Romans do. So everyone along for this ecursion was really friendly and laid back. It goes without saying that everyone we encountered in the water at Stingray City and those also at Rum Point were equally as friendly and full of smiles. How could you not be, chillaxing in the water with a drink in your hand Soca music playing.

VENUE/ACCESSIBILITY:
The first stop on our adventure was Stingray City and where else would you find a city inhabited by stingrays? Out in the ocean of course!!! We loaded all our food and drinks onto the Cayman Sunset bounced the starter and shoved off. After about 15 minutes we came upon a spot in the ocean where the water is only about chest high and crystal clear. One look overboard and its easy to see why they call it Stingray City, there was just a school of them swiming all around. The Caymanians were much more at ease getting into the water, but soon we foreigners followed, some even daring to hold or just touch the rays as they swam by.

After this first stop, and first round of drinks, we loaded back up into the Cayman Sunset and headed further out to sea, eventually coming to stop again in an area that was already populated by other boats and lots of folks liming in the water which was now about chest high, we had arrived at Rum Point beach. The Swanky Int'l crew was already out there so we had some catching up to do drinking wise, but we were up to the task.

As evening draw near and the sun began to set, we again loaded up into the Cayman Sunset to head back to our home dock, not before stopping at Kaibo for some eats at a seaside restaurant. 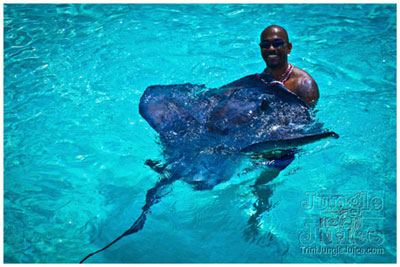 VIBES:
Eating drinking boating and liming in the sea, the vibes was bess!!

FOOD & DRINKS:
When yuh having a boat lime, everybody walks with a bottle and everybody else walks with a pot... and a bottle! So it was pelau by phoulrie by macaroni pie. Nuff beers and rum and vodka to keep the spirits bouyant.

Special shout out to Roopie and Renell Sosa for what was really an enjoyable time and hosting us.