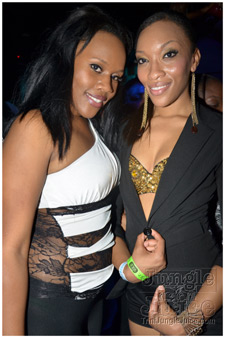 Ah bottle An Spoon...an An Joy Juice Big In De Dance.....Now Head Done Gone...So Ah Feeling to Chant....Yo, ooohh...oooohhh...oooohhhh....ooooohhhhh...An Ah Camera And Flash! No need to ask me why I in de party....I'm already known...I'm one ting they need inside ah de fete...(Give me A Camera An Flash) I Love TJJ and TJJ Love Me...I'm Totally Known...My TJJ does send me to every FETE...(Give Me Ah Camera And Ah Flash)...Cause ah snapping snapping...whole night...and ah flashing flashing...just right....An ahhh only smiling,...bbbaaaabaayyyy.........

Oh...I'm sorry...I'm supposed to be writing about Machel....well people...obviously de party was bessssss....dat song still ringing in my ears!!! People...Machel is clearly one of, if not, de best Caribbean entertainer there is....And if you don't believe what I say, read on, view the gallery and see how he had the patrons wineing wineing...whole day..jamming jamming...whole night bbbbaaayyybbbaaayyy......ooops....There I go again!

So...I am sure you will agree by the photos that the quality of crowd was fantastic. Beautiful women, in trendy wear looking prim and proper.

Club Obsessions was located right off of the I-285....for the numbers that showed up...this place easily accessible and big enough to hold everyone in Atlanta...well not everyone but rel people! The place was clean, the decor was in a black and white theme....hence the request for the patrons to wear black or white....(which they happily...including Machel) and the layout was perfect. The stage had a glass barricade separating the performers from the audience. But that did not stop the ladies from trying to climb over it to get to de main man! The bars were easily accessible and the DJ booth conveniently located on the stage. The one snafoo...was that it was hotter than ah Chulah in there...geeze an ages...But guess what...when yuh wining to "Doh Fraid" or when yuh "Revelling"...who really cares about  AC? When yuh jumping on de streets carnival monday morning, you doh walk around with ah ac unit on yuh right? So even thought it was a bit "Sahara Desert Like" We were good to go!

Hmmmm...let's see....The excitement was there because Machel was there.....the energy was present...the hundreds of dripping wet bodies were evidence enough. The music by One Drop, Tony Tempo, DJ King Noland, C Wylie and Barry from the Jugglers...were all on point. Thumbs up from TJJ! Baba Shanta came on and did his thing. He started the fire. Then as Machel and his dancers took to the stage, it was a wrap. My gosh...those girls have energy waaaaayyyyyy! And especially the one from Chaguanas...Brittany...OH MY LAWWWWDDDDD...If allyuh only see what she do in de party! Anyway...guess you had to be there to see it! You missed out on that one!

Allyuh...hear this...even the Demolition Crew had their own VIP booth and yuh done know we pass through. That lil jam session in there...was boss!

We can't tell you much about the food...but we could tell you that the drinks were flowing. Hot crowd means thirsty patrons. However, the three cash bars were all easily accessible.

The services were good. From the police officers outside the venue to the waitresses to the bartenders....the service was great. As for the promoters...they good with TJJ anytime! StarTime and Blazin 102 really stepped up their game and made this a memorable event for all in attendance.

Admission was only $30.00 and $50.00 for VIP. Not too bad at all. I believe everyone was satisfied with the show. As always, Machel gave you all he got. He never holds back.

It has been some time since Machel Montano performed in ATL. It certainly was well worth the wait. Machel performed to a sold out crowd and left everything on the stage. Much respect to Naya and VMyke for the love. Big up to the Demolition Crew, Krista/Kevin and the MaddFlava squad who always rolling deep, Tassa Roti Shop and JoMo and her girls!

TJJ had a really great time. This event was complete!