I Am Soca - The Tour Review 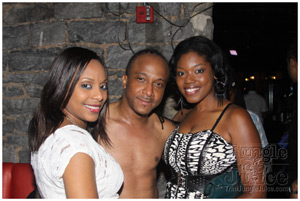 Jamaican Caublasian checking it, It’s been a long long time since I’ve been back home in Atlanta but what better weekend than Carnival? And from what I’ve seen the first two nights Atlanta Carnival jus’ keep improving with age.

Tonight we head out to Museum bar for the Atlanta leg of the I am Soca tour. Still carrying our vibes from Represent the evening before we were well ready for round 2! DJ Stephen had the crowd nice when we walked in, but we didn’t jump in right away ... to the bar!  I mean, we were just doing what Stephen told us to, walking in to hear “I’m already druuuuunk”, clearly we had to catch up! Drinks in hand we were ready.

Lemme tell you, is a long time since I’ve been to a party where people came there, ready to party. And it’s definitely one of the things I miss about Atlanta. Many a shorts and sneakers in the venue, and not a poser in sight! Sweat? Required! We’re here to jump up!

DJ Majestic had the crowd so nice we coulda almost be content wid jus’ the jugglin’. And then DJ Stephen mek an announcement about the steel pan! Yes! You tell me which party have a live Steel pan? Sell off! Then Kerwin Dubois took the stage and raise up people energy even more. Him and Lyrical and one very competitive whinning competition had people jumpin’ so hard the club a shake ... then Benjai walk on ... wow, I’m amazed the roof never blow off.

Party people! Dis yah, was a party not to be missed. A great memory of how good it is to go out and dance and not have a care! Poundaz! Is my first party wid unno, but now me know ... I jus’ need to follow where you be.