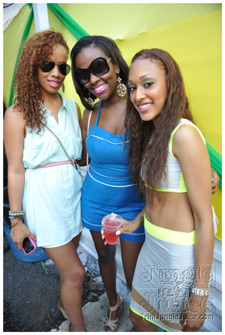 The crowd was much younger than the other events of the weekend.  The outfits and costumes provided enough sites to keep those who expected a soca fete and performance thoroughly entertained through all the reggae music.  The grown and sexy, the "sexy" and the mature were in attendance.  When Kerwin came he brought the energy to the crowd and people responded!

Volume 2 was spacious and the small tall tables and white tents gave a sophisticated look. The crowd seem to be at least 200+ and at points it seems that a soul-train line existed where every one got a chance to see what you were wearing.  As the night continued, the venue was large enough to fit the crowd but with rain the covered areas seemed someone congested.

People who loved reggae, definitely got there money's worth!  The Vibes was ah bit stoosh and many people was jus standing and socializing.  For soca lovers, it was a bit of a disappointment.  The 2 minute performances were rushed and barely audible.  When Kerwin Dubois came he brought the energy to the crowd and reminded us all that this is a soca fete however the vibes were more coasting and socializing than an all out soca fete. Thankfully DJ's B2B and Private Ryan mash it up for a short period to give us an opportunity to enjoy the vibes.

Not an all inclusive and even with the crowd people still was able to get a drink and some food.  If yuh was hungry... de food was cutting. Bathrooms were a bit disappointing. Ladies definitely had to come prepared.

The cost for tickets were $40 at the door but still reasonable given that it didn't inflate much higher than that as the party continued through the night.

High points definitely was Kerwin and B2B and Private Ryan.  It was good to see that they had great DJs out there keeping it swanky for us soca lovers.  It was a disappointment that the vibes was consistent and the 40 minute + of reggae music dampered the vibes.