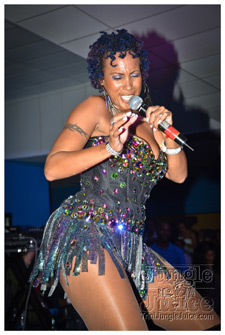 Just imagine....Trini fete in one hand and VI Wuk Up in the next...hmmmm...weigh it....think about it......measure it, explore it....hmmm....What do we do? Which do we choose? Well I say both! The proof was in the masses! I don't know about you but here's how I would score it....The VI crowd...they rolled deep...but the Trini music was on point...obviously! And for the winer waist competition that Lyrical started and Alison Hinds finished....well you just have to see for yourself...but when I tell you trouble! Geeze and Ages!!!

As always....every year....this event never fails to draw a large crowd. The skating rink was almost packed out in anticipation of the guest artists to come. With a true mixture of Caribbean folk showing up, there was no shortage of rags and flags, best dress outfits and big smiles for the camera. The crowd was easy to look at and we found it easy to capture.

The venue, Golden Glide Rink, a skating rink in Decatur, GA, was easily accessible from Interstate 20 (I-20). The big plus is that this venue had a huge parking lot which accommodated everyone who attended. Most venues struggle with having this as a luxury. The interior was simple, not much to boast about....the decor was ok, but the size was fantastic. Good decision by the promoter to go there this year. The place is always clean. As for temperature...it was not too bad because the ceiling is high and there was enough room to move around. But....there is a but.....when soca music playing, the heat will always rise....when Alison Hinds performing...the heat will raise...amonst other things....oops....I did not just say that!

What an event! This Soca Xplosion is becoming one of the biggest go to events for ATL Carnival. The promoters have been consistent with Artists, DJs and their overall service. This year, they managed to succeed last year. The first to take the stage was the band 'Daddy Jones and the Crew' who had a fair to fine performance. Not too bad at all.

Lyrical...the Ramajay king...started the list of high profile artists that performed. But before we go there...two of the best MCs in the business must get the respect they deserved....Giselle 'De Wassi One' and MC Wassi from New York....definitely know how to hype up a crowd! Ah mean...they are the closest thing to artists...they know every song, every DJ, every entertainer and every promoter. Much respect to you. So back to Lyrical. He started the competition between the Trini's and the VI crowd by bringing a female dancer from both islands. Well it was best! Talk about waist throwing! Well I will tell you...the VI girl win that round. She through fast waist, slow waist, medium pace waist...ah mean she was on point! As for the Trini...she was boss...but didn't match up...She was probably from....well let me hush my mouth! Anyway, Lyrical gave a really good performance himself. We hope that he continues on this path. As the show moved on...the St. Lucian general Rikki T came on and did his thing. He practically fell in love with one of his St. Lucians on stage. Just watch his face!

Next was probably the most popular rising artist coming out of Trinidad and Tobago...Kerwin 'De Bacchanalist' Du Bois.....With renditions of 'Runaway' and 'I Am Soca', Kerwin mashed up de place! From there....allyuh done know Da Boss...and what he can do! Iwer George is Iwer George! He had the crowd doing whatever he wanted. As usual....allyuh go so....allyuh come here...allyuh run...allyuh walk. Whatever he wanted! Equally as powerful and entertaining...is the #1 Female Soca Singer in the business 'Ms....Ms......Ms. Alison Hinds!!!!!!! And yes people...she still looks good :) Alison gave a tremendous performance as expected. And in sync with the Trini Fete vs VI wuk up...she put both VI and Trini men to the test...allyuh done know what happen there...and who won! Is de Trini man yes!!! And the first prize was a wine on Alison's bumper...Well I almost put down my camera! Amazing! That, I am sure was the best wine ever...just watch de man's face! She agrees....100%! But anyway....the Soca Xplosion certainly exploded.

To wrap up the show was the spectrum band! They had a good performance. The Dj's kept the crowd moving in between the performances and did not disappoint.

There were two a cash bars available, one of which was a bit too small. The large crowd struggled to buy drinks and see the show at the same time...but having two was a good idea. Top shelf drinks were available as always. As for food...I cannot remember her name...but people....moms had de best jerk chicken ever! see the pic of her. She rel handle we breds! My lawwd...talk bout best chicken...steupes. Dat bone did not stand a chance!

Without a doubt...the service from the promoters has never been less that exceptional! Thank you promoters for always taking care of Trinijunglejuice! We appreciate you!

The cost to get in was $25.00. Great value for that high powered cast of entertainers and DJ's!

If you decide to make it to ATL Carnival 2013, you must place Soca Explosion on one of your list of things to do. You must! Great show, put on by top class promoters. Over the years they have been consistent with bringing quality performers and DJs to this concert. We expect 2013 to be no different! True, thanks for all that you do for your people! Keep it going! Otis and Shoville...much respect! Jo...yuh large! Mummy Karen...nice to see you in ATL...meh Little Red Bone....I happy to see you smiling so much for de camera these days! Or is it de camera man?