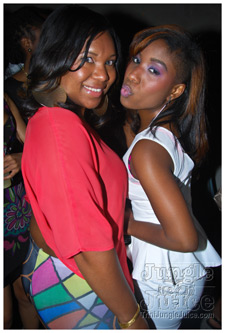 Even doh we're still recovering from all the fetes that took place on Memorial wknd. We got a call from Hari about a party with Action, and you know we don't like nothing better. Once there's Action you're guaranteed to find TJJ NY. Yes, we're tired but that's alright. We'll rest when we're Dead. Time to head out for some Action.

We arrived at the venue an was instantly greeted by lovely hostesses handing out cocktails. While Mellon Juice helped herself to one. You all know me, I love my Heiniken. So off to the bar we go. Big up the Male Bartenders with the bubbly personalities. They were really sweet. The party was supposed to start around 4ish but this is Bk 4pm means 9pm. Natural Freaks started of the early vibes playing a bit of everything. It didn't have much Action yet but don't worry the night is still young. Dj Bittaz turned up the vibes a bit. Then by the time the hostesses handed out some sizzling BBQ wings and passed out their signature shots. That was it! De dance tun up LOUD now. Pantrin Vibes came an woke up the entire party. We got food, drinks at a reasonable price, free shots an not forgetting the cute little buckets. This backyard had a whole lot of Action. "Gyal ah yuh wine an bend down lowwwww!!!" What more can you ask for?

This event had all the elements of what Tjj likes to call a "Bess Fete" - A sexy crowd, beautiful ambiance, likable promoters, and of coarse Plenty Vibes an Plenty Action.  Big ups to Hari, Sho, Jia, Josie,Shida and Sion we didn't forget you :) on a job well done.  For your first time you guys did an awesome job. We're looking forward to see what you guys have planned for your next event.