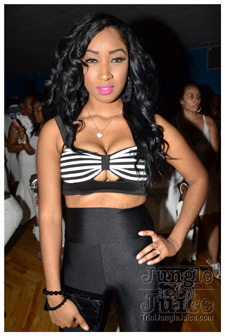 Just in case allyuh didn't realize...theme parties are up on the rise. And Jillian and her associates have found the right formula to get the numbers coming out every year at her annual Wear White. This year, and for the first time...no performers graced the stage....but we didn't business because de fete was rel niceness as some of Atlanta's top soca DJ's literally mash up de dance. And Jillian...yuh see those new three color foam sticks.....we like them...that was a rel nice touch. And honestly....this year's Wear White had everything we needed...and shhhhh....doh tell my...uuuhhh ummmm....ehhhh...but it had rel woman in de party boy....llllaaaaawwwwwddddddd...Ah catch mehself taking ah lil peep from time to time but ah promise allyuh...I behave....No Lie!

In honesty, I think this year's Wear White succeeded 2011's by far in every aspect. The crowd was much bigger and talk bout well dressed....We have to give the beautiful ladies we saw there, the Flava Flav wow.....wwwwwwwwwwwwwooooooooooowwwwwwwwwwwww! The women certainly were decked out in their Sunday night best dress. Especially that smally in her peacock pants...my goodness....Anyway... in the words of Peter Ram...Yuh sweeter than before...because yuh White Pants Tight..yeah yeahhhh...Talk bout tight white pants in de party...steupes! And nearly all of them tighter than ah vice grip! Picture that! MC Wassi from NY was in the crowd doing his thing as well. The crowd in 2012 was on point in all aspects.

A mainstay in Atlanta over the last few years....Gillian has made the Golden Glide Rink, in Decatur, GA, her home for Wear White. It is easily accessible from Interstate 20 (I-20). A certain advantage is that this venue had a huge parking lot. And security was tight tight so, I didn't hesitate to park my truck close by.  As for the interior, the decor was ok. JT did her best to make the place special with dropping black lights from the sealing.... As for size...it was perfect.  The temperature was ok...not too hot....not too cold....It was just right. Doh care if de temperature hot...we go keep wining back...at least that is what it seems..No one really called about the temperature.

My view on the vibes will be simple.....With the vibes coming from DJ Stephen, clearly one of the best Caribbean DJ's, and from DJ Jaspa...Atlanta's premier DJ, you really may not need anything else. Promoters, if you have not heard Jaspa play as yet...you should check out his stuff...it maddddddd!!!! De man and his crew bbbbaaaaaadddd....they rel play. Backing them up with his experience is none other than Tony Tempo, a true veteran in the DJ business...They all set, start and ended the pace at Wear White. An old school soca and dub session was the highlight....boy oh boy....You should have been there

Like most of the events this weekend, JT had a cash bar that was and as always well stocked. Just look at the listing! As for the food, it was ok...not too bad. However, we found that the bar counter could be a bit longer and positioned at a different location in the party. But either way....JT had her system worked out by having nuff people in the bar working.

So I will address this easily.....the promoters of the Wear White event are some of the most respected promoters in Atlanta and are know for supporting everyone and their events. JT....thank you for your hospitality.

For those of you who like to bump your gum and think that Atlanta don't have boss parties...I challenge you to attend one Wear White party. The party was real nice. Collin and Almesha...love to you guys...and I cannot forget Beres who was on the inside. Even Mommy Karen come all the way from Jersey to be in the dance. And to beat her back was the Houston Crew!!!!! The roll real deep in the Wear White. I have to big up that Houston Crew large...TJJ seeing allyuh in a few weeks for Houston Caribfest! For this party, the vibes was never ending and if you don't believe that too, just check the time I was watching a bumper moving....5:41am in the morning....and de party nah done! But TJJ had to roll out...we have a flight to catch...We departed WW at 6am.

Much love to JT for her hospitality and love. We appreciate it.