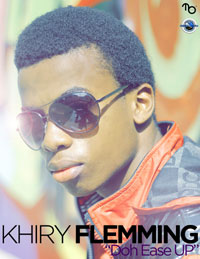 Port-of-Spain, Trinidad. June 5, 2012 -- A young soca artiste who’s relatively unknown on the local and Caribbean entertainment circuit is proving that success lies in wait for those who want it most. Already booked for ten major appearances during the upcoming Toronto, Caribana festival, Khiry Flemming- a former Synery Soca Star contestant in Trinidad and Tobago, is on his way to making a big impact. He’ll be jetting off to Toronto with the band he’s been working with for the past few months- Mayaro The Band, and explained that following the band’s gigs in Toronto, South Africa is the next stop.

Having been the lead singer of the band alongside a female vocalist by the name of Valerie for the past few months, the 18-year-old who placed 3rd in this year’s national school’s Soca Monarch competition in Trinidad, has been showing off his ability to perform and wow audiences across the country. The band is a regular at hotspots in Trinidad, such as De Ja Vu, Checkered Flag Restaurant and Sports Lounge in San Fernando and Toppers Sports Bar and Grill in Grand Bazaar. During the recently held Tobago Jazz festival 2012, Khiry and the team of musicians who make up Mayaro the Band rocked the house at the Mt. Irvin Beach facility, displaying a level of professionalism, showmanship and not to mention a level of versatility that was astounding to many who experienced it.

Now, as he prepares for what lies in wait, the youth from Siparia who has already contributed a number of singles in his budding career, is set to deliver a reggae single complete with a video. He’s also promising two Soca tracks for Carnival 2013 all the while, pursuing his studies at the tertiary education level and ensuring that whatever he delivers, in every facet of his life, is top notch. This past season’s breakthrough onto the mainstream Soca circuit by youngsters, Erphaan Alves and K.I., has definitely given Khiry a positive feeling. “I believe now, more than ever that I can make it. They’ve given me real hope,” he said.

A big fan of Machel Montano’s music and his marketing genius, Flemming, backed by his Mayaro the Band team is looking beyond just soca. They plan on leaving big impressions wherever they go by executing varying genres of music and stimulating audiences with lively performances. Added to that, Khiry has big plans to collaborate with other artistes in the near future. As he develops his craft however, he’s looking on- taking the advice of those who’ve progressed well over the years and using it to his professional benefit. He knows music is what he desires most and with that firmly embedded in his mind, Khiry Flemming is prepared to go all the way to the top.