Gayle Says Windies Will Bounce Back 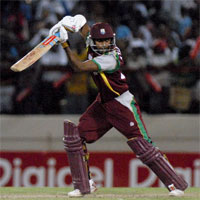 West Indies captain Chris Gayle smashed the 17th century of his One-Day International career, but it was not enough to secure a victory over Pakistan in the opening match of the Fortune Cup Series on Wednesday.

Playing for the first time at the Sheikh Zayed Stadium in Abu Dhabi, the powerful left-hander hit 11 fours and five mammoth sixes in a stunning knock of 113 off 106 balls as the Windies reached 294 for 9 off 50 overs. Pakistan replied with 295 for 6 off 49.5 overs to win by four wickets with one ball to spare.

“I felt I batted really well today, but I would have liked to come away with a victory in the first match we played at this ground. It was a really good pitch for batting. We were confident we could defend the score we put up,” Gayle said after the match. “Credit must go to Pakistan for the way they played. They always kept themselves in the match and batted well all the way through. We fought hard but they managed to get the better of us.”

In the batting, good contributions also came from opener Sewnarine Chattergoon (33) in an opening stand of 125 with Gayle. Vice Captain Ramnaresh Sarwan made 55 from 61 balls, while Shiv Chanderpaul and Xavier Marshall scored at better than a run-a-ball to maintain the momentum. In the bowling, seamer Lionel Baker was confident in his first international outing, taking 3 for 47.

Gayle’s brilliant batting him the Man-of-the-Match award. It was the first century at the ground and the second in as many matches for the 29-year-old, following the match-winning 110 not out against Canada in Toronto back in August.

He noted that the Team plans to have a close look at how things went in Wednesday’s match and will be aiming to bounce back and square the series in the second match on Friday.

“We have to bounce back strong, we have no choice. We have to win on Friday and keep the series alive. We know the areas we have to pay closer attention to and correct. We intend to do just that,” Gayle said.

The second One-Day International is on Friday, November 14, and the third on Sunday, November 16, at 3 pm (7 am Eastern Caribbean Time/6 am Jamaica Time). Cricket fans can watch uninterrupted coverage of the West Indies ODIs against Pakistan courtesy of Digicel, who purchased the broadcast rights to the three ODIs so that they can be broadcasted free on terrestrial TV around the Caribbean.

For all the latest news and images, log on to www.digicelcricket.com