By Neil aka Joy Juice
Published on 27-May-12
Over the last few years, Atlanta Carnival has struggled to get a solid breakfast fete off since the days of the Pan Yard! And make no mistake...trust me...the people were starving for a little breakfast party....somewhere to go after fetting all night. By the why, is only one country who have people like that...people who want to fete till day clean...fete till fetting done, fete till de cock done crow and gone back to sleep...is Trinis!! But allyuh already know! Anyway...
>> View Sunday Morning Gallery
>> View Atlanta Carnival 2012 Coverage 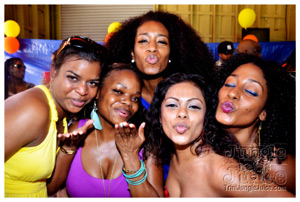 Over the last few years, Atlanta Carnival has struggled to get a solid breakfast fete off since the days of the Pan Yard! And make no mistake...trust me...the people were starving for a little breakfast party....somewhere to go after fetting all night. By the why, is only one country who have people like that...people who want to fete till day clean...fete till fetting done, fete till de cock done crow and gone back to sleep...is Trinis!! But allyuh already know! Anyway...We know what de people dem want...and a light went off in DJ Jaspa head....and if allyuh know Jaspa like I do...when dat light go off...it's like de best idea ever! So he call TJJ and say..."boss...ah having ah breakfast fete, wha yuh could do for meh?" When I asked "what's the name of the event?" He said "SUNDAY MORNING!" Yuh know something...that have ah lil kick to it yuh know? Anyway, so we worked out the details, got him up on the site and just waited till...."SUNDAY MORNING"............OH MY LAAAAAAAWWWWWDDDD......DE BEST PARTY FOR DE CARNIVAL...GEEEZZZEEE AN AGES.....To my people who read my reviews....don't I get it spot on? Don't I get the critique right? Well pleaseeeee believe me when I sayyyyyyy DE BEST PARTY EVEEEEERRRRRRRR!!!!! Can you believe that people come to Sunday Morning Breakfast fete....RIGHT AFTER CHURCH? Are you serious? That's to tell you how best the party was...I will end the intro like this...true story,...ah man in de party say...he listening to de pastor...and all of ah sudden he get ah text that read...(Not calling him out) Let's say his name was "Adam"...the text say..."Adam..I know yuh in church...but if yuh see best ting in Sunday Morning breds! Say ah prayer for meh!"...Allyuh know day man...text back..."Ah on my way, prayer said for you and me!".....Well dat one take de cake... 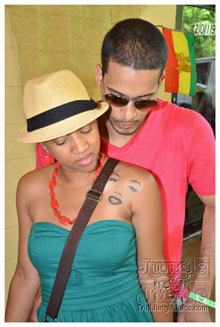 Like de man who sent the text..is only best ting in de party. Everyone had on their Sunday best...looking prim and proper...It was probably because they come from the events the night before...but the crowd looked good. The women had on their lil shorts or they lil sun dresses...and de fellas were rocking their 3/4 cargo pants...and their medium v-neck strong man jerseys...Allyuh know de ting! Overall the crowd look good....And even though it was not ah best foot wear...two girls show up in some rel San Wha market slippers...but they smart...they dolls it up rel nice...

The Venue..."After Dark" was ok. Nothing special...But had everything we needed...ample parking, bar on the inside, open space and covered space. The temperature was good because it was in the sheltered area that had a few large openings. Allyuh had to be there to understand it. The location was easy to find via gps...and if yuh got there and could not find the entrance...you couldn't miss the balloons! There was not much else other than that. Ah mean...yuh don't need much to bruk out all night....sorry...All Morning!

I will sum up this up in a few lines...and hopefully you will be very upset that you were not there. Before I do, I kid you not...DJ Jaspa and the One Drop family, are some of the best DJ's I have heard in Atlanta. Promoters who reading this....allyuh wasting time if they not on your flyer!!! And for the first time ever...I will use bullets in my review! Here goes:
1) Dj Jaspa, DJ Stephen, One Drop, Shane Talon, MaddFlava...DONE!!!
2) MaddFlava Crew, We Kinda Ting Crew, Wire Waist Crew, MaddColors Crew...DONE!!!
3) Curry Chicken, Doubles, Channa, Salad, Jerk Chicken...DONE!
4) Trinijunglejuice.com....DONE!!!
5) Best looking ladies...DONE!!!
6) Vibes...DE VIBES CAN'T DONE!

The bad was a chit system....both hard liquor and beers were in stock. The food was boss...especially because it was included in the price :)

As for service, we could not have asked for better treatment. From the moment we entered the gate (5:30am ish) to the moment we walked out...(minutes after 2pm)..Jaspa was like..."Juice...yuh good?, yuh cool?" " need anything?" "Yuh sweating Juice...yuh need some water?" At one point, he even offer to wipe de sweat off my face when ah was taking ah lil half wine. That is rel service. Jaspa and Corey...thanks for hospitality.

The cost was great. It was $15.00 and included Atlanta's top DJ's, some of the sexiest women in the area, parking and food. No need to go further. 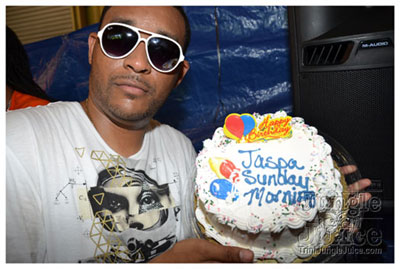 "Needless to say...Sunday Morning for me is clearly one of if not the best party for the carnival! If you missed it this year, shame on you! But if these guys come back next year...please don't miss out. DJ Stephen closed the party out without a song being player...for those that were there...that was a treat. And I cannot remember the small man name who rip up the turn tables...but he was real good. DJ Jaspa celebrated his birthday and even had a birthday cake. We sang to him too! Allyuh...I feel like family with these guys. I felt at home....and shhhhh not saying too much....but Miami...watch out! To the crews that rolled deep in there...it was pure niceness...

Jaspa, well done. Congrats. Allyuh have something in the making here! I hope you keep it going. Nuff Said!!!