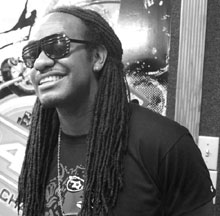 POS, Trinidad (Sonique Solutions) – In his quest to carry his Caribbean-inspired sound to the global masses, Trinidad and Tobago’s Ragga-Fusion artiste Mark Hardy has made unmistakable progress in today’s ever-challenging music industry landscape. From creating cross-genre collaborations to interacting with international artistes, this emerging T&T talent is consistently blazing a trail towards becoming a household name.

Hardy, whose real name is Marcus Braveboy, made waves in the local and regional entertainment circuit with his 2010 single, “Lyrical Apology” and its cinematic accompanying music video. Today, with a steadily growing fan base in the Caribbean, North-America, Europe and even New Zealand, he is pushing the creative envelope with his new release “Ta Buena La Cosa”.

This latest musical contribution is a latin-flavoured love song featuring Mark Hardy together with singer Dia aka Claudia Cruz (who is a former Miss Dominican Republic and 1st runner at the Miss World competition). The Trinbagonian performer, businessman and advocate for cultural integration shared that the song has been embraced by both the Caribbean and Latin American markets and has the potential to further break down cultural barriers between those unique demographics.

On a global scale, not only has this young, charismatic entertainer earned the respect and approval of his industry peers, he also recently secured a deal with Vermont based record label Slanted Black Records to have his hit single “Turn it up” distributed internationally. Most notably Hardy has performed on numerous occasions with T&T Pop-Rock outfit, 5 Miles 2 Midnight which has afforded him the opportunity to share the stage with international sensations Evanescense, Lifehouse and Stephen Marley.

Blessed with a formal education in law and a natural skill in marketing, Mark Hardy keeps things progressive on the business front with his online marketing firm IKE (I Know Everybody) Consulting Ltd. Never one to become complacent, he stated that he is constantly combining his talents, knowledge and innate abilities to promote and elevate his career to the next level.

With regards to his fans he shared with gratitude, “I have a very supportive and loyal fan base full of people who keep me inspired to continue this music journey. My fans and supporters can expect better music, more innovative and fun ways to promote my music and of course epic music videos and collaborations. Stay tuned”!