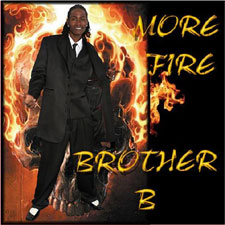 Brother B first launched in the Soca scene in 2007 with hit tracks Pork, No Horn and Explosion amongst other tracks.  Brother B also won St Mark’s Soca Monarch and is one of the freshest new talents to emerge on the Soca scene from Grenada.

2008 saw his hit track ‘A Little Wine’ win best song at Soca Monarch 2008 in Grenada and is still one of the most requested songs. Tracks such as Loose and Bad Like We lit up Notting Hill Carnival, Miami Carnival, Labour Day and even London Hackney carnival this year.

With Soca growing fast and fans across the world from Europe, USA, Canada and the Caribbean it is important that Soca Music is available worldwide

For details on purchasing his album please see link below
http://www.specialist-events.com/store/music/albums/b/brotherb_morefire.php

For more details on Brother B check www.myspace.com/1brotherb