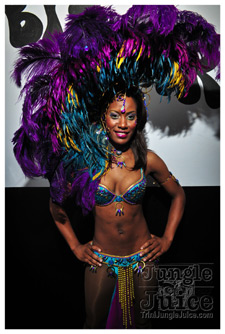 With Notting Hill Carnival 2012 absurdly close to occuring, all the relevant mas bands in London are having their band launches and with no exception, the latest to join the long list of mas band choicies is Euphoria Carnival. Presenting its Mas Band at The Clinic, Piccadilly Institude, we saw a parade of four (4) costumes all being designed by the infamous and talented designers of TRIBE - one of the most recognised mas bands in Trinidad.

For the females, the magnificent blend of a various shades of blue with a hint of purple for one costume seems to be the popular choice. However, the continuous use of large and exotic head pieces and purple mixed with tints of yellow for the other costume seems to be a strong contender as well. Not forgetting the boy shorts for females and something of an Arabian style head piece and upper body armour being labelled as 'Fun Mas' can be popular. For the males, the usual knee length shorts and if you are not comfortable about your upper body, the sleeveless jersey is an added bonus. For all information and monetary values for this enjoyment can be found at www.euphoriacarnival.com

The choice now of which mas band a patron should play with for Notting Hill Carnival 2012 has now definitely been increased and has totally lost all possible control. With the armada of mas bands present it really becomes very difficult to make a choice for the exciting bank holiday weekend ahead.