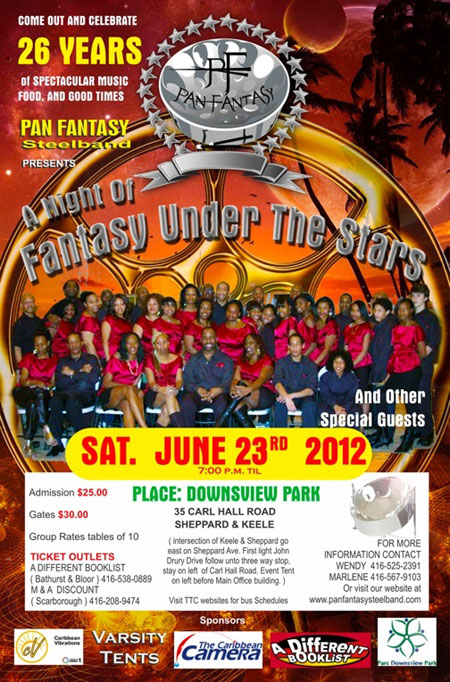 Toronto, ON, Canada: Acclaimed Paul Keens Douglas – beloved Caribbean storyteller/author/comedian – will be one of the special guests performing at Pan Fantasy Steelband’s “A Night of Fantasy Under the Stars” to be held on Saturday June 23rd, 2012. Venue: Downsview Park, 32 Carl Hall Road, Toronto; show starts at 7pm. Tickets include dinner: $25 (adv); $30 (door); group rates available for tables of 10. For more info contact: 416-525-2391; 416-567-9103; www.panfantasysteelband.com.

“It is an honour for us to have Paul, a Caribbean cultural icon, perform at our anniversary concert,” says Wendy Jones, band leader and business manager. “His comedic stylings will enhance the entertainment we are providing for our 26th anniversary show!

“Other special performing guest will be attendance too. However, they will be announced on the night, so to know who they will be ... well ... you’ll just have to be there on Saturday night to enjoy them! Trust me, it will be a “not-be-missed event ... and a night not soon forgotten!”

Pan Fantasy Steelband’s performance repertoire comprises calypso, classical, reggae, jazz, Latin, pop, R&B, Soca, etc. This steelband’s players range in age from 14 to 65. It has a strong youth element; 40% of whom attend college/university during the winter months. However, during the annual summer months, Pan Fantasy’s experienced performers swell to its competition size of 75+ musicians.

Responsible for its sound is award winning arranger Al “Allos” Foster. Highly respected within the steelpan community, Foster has been Pan Fantasy’s principal arranger for the past 10 years. He was at the helm when Pan Fantasy won the Toronto “Pan Alive” Competition for 2005 and 2006. His stella arrangements have maintained Pan Fantasy’s position as one of the best Toronto-based steelbands for the past five years.

They perform at many types of private functions including weddings, birthdays, corporate functions, galas, and community events using a core stage side of 25-35 members. Under Jones’ outreach stewardship, Pan Fantasy has also performed for the past three years with other traditional drumming communities including the Native drumming community based on Manitoulin Island, and with the Wikwemikong Unceded Indian Reserve.

“Both of our indigenous communities see the drum as a sacred beat connecting the love and life of the human realm with the heart beat of Mother Earth,” says Jones.