Reggae On The Bay Review

>> View Reggae On The Bay Gallery 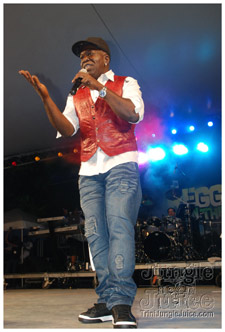 The first of what is to be an annual reggae music festival was held on a lovely Sunday afternoon in sweet T&T. We pulled up to the O2 park just as the sun was preparing to cool off with a dip in the Gulf of Paria. The ambiance was amazing as we found a spot on the well-manicured lawn to enjoy a night of performances by reggae royalty. As we got situated Marlon Asher was finishing his set, which included his hits “Ganja Farmer “ and “Cowboy”. The event flowed smoothly as other local reggae performers including Aaron and Helen Marquez took the stage and spread positive vibes to the relaxed but receptive audience. DJs including X-Caliber International Disco helped to further set the mood with a selection of tunes from years gone by right up to current reggae anthems.

When the first main act Steel Pulse took the stage, the previously mellow crowd surged forward to be up close and personal with the band. They performed an energetic set of their well-loved hits including “Earth Crisis” and “Roller Skates”. As their performance ended lead singer David “Dread” Hinds was serenaded with a surprise rendition of Happy Birthday by his band mates before closing off on a high note (no pun intended).

Rory from the Immortal Stone Love sound system then kept the crowd swaying and skanting as the stage was set up for the next headliner Barrington Levy. He was joined by singer Jah9 who performed some conscious reggae selections. Patrons took the opportunity to taste some of the usual concert fare that was on sale including some bess corn soup and to refill their cups with the free drinks available at the bar.

Barrington Levy hit the stage bringing excitement with his melodic voice that sounded just as good or even better than the recorded version. He never missed a note as he pumped up the crowd with a steady string of hits from his vast repertoire including “Black Roses” and “Too Experienced”. The concert was the perfect Sunday evening outing that united reggae music lovers of all ages, races and walks of life. We will definitely be on the bay for next year’s installment of the annual event.

>> View Reggae On The Bay Gallery