Pat and Pearl Haute Couture will be hosting a Fashion show, VINTAGE, on Sat 29th Nov 2008 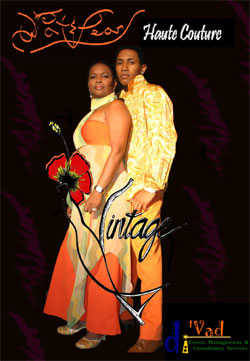 Pat and Pearl Haute Couture present “Vintage- Spring 2009 Collection.” The Fashion extravaganza will be hosted in the Hall of The Linx Suite Hotel (Vintage Car Rentals), San Fernando on Saturday 29th November, 2008 at 7:00pm. The Show will be a mélange of Vintage clothing made from the 1930s to date featuring of Six (6) Sections V-Vintage, I- Ivory and Ebony, N- New Vintage, T- Temptation (Intermission), A- Ave Maria, G- Glitz and Glamour and E-Empire. Vintage will be the fourth fashion show produced by Pat and Pearl Haute Couture. Previous shows included “Shades of Blue”-2004, “A Musical Couture”- 2005 and “La Vogue”- 2006.

Clothing which was produced before the 1920s is referred to as antique clothing and clothing from the 1920s to 1980 is considered VINTAGE. Although there has always been some demand for old and/or second hand clothing, the awareness, demand and acceptance of this has increased dramatically since the early 1990s. Pat and Pearl Haute Couture is one company that has been meeting the demand for such clothing.

Hailing from the southland, 13-26 S.S. Erin Road Penal to be exact, Pat and Pearl Haute Couture is owned and managed by Patterson Nelson and Pearl Alvarado. Both owners are Designers and produce a range of different types of clothing such as formal dresses, suits, costumes for dancers, and have outfitted Queens in various pageants throughout Trinidad. The fashion show promises to be like none other…come experience “Vintage.” For more information please call 439-1419 or 779-5565.

5 Responses to "Pat and Pearl Haute Couture will be hosting a Fashion show, VINTAGE, on Sat 29th Nov 2008"