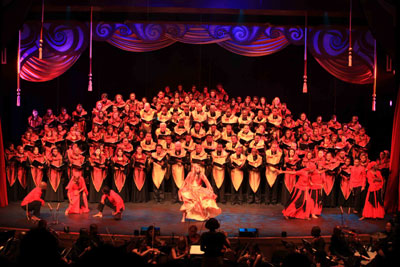 SUNDAY 1 JULY, 2012 (PORT OF SPAIN, TRINIDAD & TOBAGO): Next weekend, the Marionettes’ three choirs give Karl Jenkins’ new contemporary classic “The Armed Man (A Mass for Peace)” its Caribbean premiere as part of the Marionettes’ anticipated mid-year concert, of “A Gift to the Nation II”.

For two nights only (14–15 July), this celebratory concert comes 25 years after the Marionettes' first offering of “A Gift to the Nation” commemorating the 25th anniversary of Trinidad & Tobago's independence in 1987. Now the Marionettes marks Trinidad & Tobago's Jubilee with this exciting premiere, together with the debut of their new Children’s Choir and much more.

“The Armed Man” has been called by the UK’s London Times as “a rapturous performance, by turns visceral and ethereal…a firebomb of orchestral and human voices”. This heralded multi-media and multi-cultural work – a deliberate contrast to last year’s lavish production of Bizet’s “Carmen” – was commissioned for the UK’s Millennium celebrations.

It boasts a range of musical styles from across the globe – sung in English, Latin, French and Arabic – and ranging from Palestrina-style Renaissance polyphony, plainchant, medieval ballads, and more, all emphasising what is universal about the human experience. It also is particularly distinctive for its inclusion of multicultural literary, musical and visual elements, including a film developed exclusively for the work; the Islamic call to prayer; the Mahabharata; and text by Rudyard Kipling, Alfred Lord Tennyson, John Dryden, Jonathan Swift, Guy Wilson, and Sankichi Toge, a survivor of the Hiroshima bombing in World War II. The BBC explains its lasting popularity: “it's musically accessible, and quite a show, particularly when performed live”.

Complementing this exciting one-hour work is a showcase of some of our nation's most talented young people, as the group’s Music Festival Winners take centre stage with their winning performances – including members of the Marionettes’ new Children’s Choir, which makes its debut at this concert series. There will also be a tribute to a legend lost too soon, the one and only Whitney Houston.

This year also marks 40 years of partnership between the Marionettes and primary sponsors bpTT. “BPTT began its partnership with Marionettes in 1972, and although there have been many changes to the company over the past 40-od years, our commitment to Marionettes has endured. This is primarily because we share the belief that arts and culture can be used as a powerful agent for self development,” explained bpTT President and CEO Norm Christie. Added Marionettes production manager Joanne Mendes: “Without that support, the challenge of sustaining the choirs over a long period would have been a hundred times harder. This has been a model of thoughtful, well-targeted cultural support by a major corporation in Trinidad & Tobago.”

Proceeds from “A Gift to the Nation II” go toward the Marionettes Property Fund, and the construction of Helios Hall, a secure rehearsal, storage and performance space for the group that it hopes to share with the national artistic community.

ABOUT THE MARIONETTES:
Founded in 1963, incorporated as a non-profit in 2005, and sponsored by bpTT since 1972, the Marionettes Chorale (Hummingbird Medal Gold) is one of the Caribbean's most celebrated choirs, both at home and abroad. In 1995, the Youth Chorale was formed, comprising boys and girls from over 30 secondary schools nationwide; and in 2012 the 50-strong Children’ Choir was formed. Led by conductor and artistic director Gretta Taylor, and a committee headed by founder member Joanne Mendes, the choirs mount at least two major productions a year, showcasing a repertoire ranging from European Renaissance to Opera, Broadway, Caribbean Folk and Calypso.