By Jo-Ann aka Karamel
Published on 23-Jun-12
Saturday night in NYC and the TJJ crew is heading to see history in the making as Machel Montano and friends take over the Intrepid Sea, Air, and Space Museum.  Yes, the historic museum got injected with a dose of Caribbean culture…
>> View Machel Montano 30th Anniversary Concert Gallery 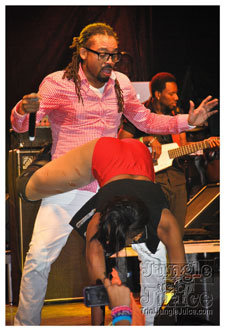 Saturday night in NYC and the TJJ crew is heading to see history in the making as Machel Montano and friends take over the Intrepid Sea, Air, and Space Museum.  Yes, the historic museum got injected with a dose of Caribbean culture …… WE REACH!!!!!!!!!!!!!!!!!

We arrived just in time for the main event and realized we were partying on the pier and not on the boat as we might’ve believed.  Small ting, I think it’s safe to say we as West Indians prefer to be fetein’ outside rather than inside.  So after we got through the security issue at the door, we headed straight to Platinum VIP to get a drink as it was needed.  An hour after doors opened it seemed that the VIP bar was either low on liquor or ran out because we were only offered chasers….WHAT!!!!!!!!!!!!! Off to the cash bar we go and that ran out of liquor too…..not looking good too good.

After the excursion to find alcohol we came up empty and shortly thereafter, Dahved Levy announced that the artists were finally @ the Intrepid and were held up traveling but that the show would begin shortly.

3 Canal opened the show giving a nostalgic vibe which set a nice welcoming tone; Barrington Levy was up next and performed for almost an hour singing all of his classic hits.  Mr. Bruk It Down Vegas had a short set which could’ve been a little longer but he hyped the crowd for Mr. HD and his team. 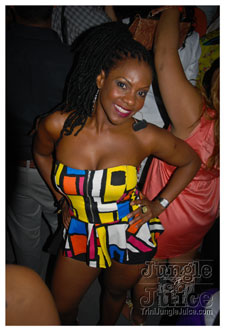 As Machel hit the stage, he apologized for being late and made an attempt to quench the thirst of those in Platinum VIP closest to the stage by sharing out what looked to be his signature bottle 3 Zero….nice touch Mr. HD.  In true Machel fashion, the crowd forgot that the bar didn’t have any food or drinks to explain the $200 spent for Platinum VIP, $100 for VIP and to be mixed with general admission.  Farmer Nappy, Patrice Roberts, the HD dancers and KI all took the stage and gave an intoxicating segment that made you really forget that you were sober.  The feeling was enhanced by a mini costume presentation by Big and Strong Promotions as they presented their Miami Carnival presentation alongside “P.Y.F”, ”It’s Carnival” and “Band of the Year” to name a few.  I’ve never seen too many people leave a Machel show that sober but there is always a first.  Though patrons were upset for feeling cheated for lack of alcohol, they definitely enjoyed the show.

Mike, Grayson and Dahved  great job in making history yet again in NYYC.