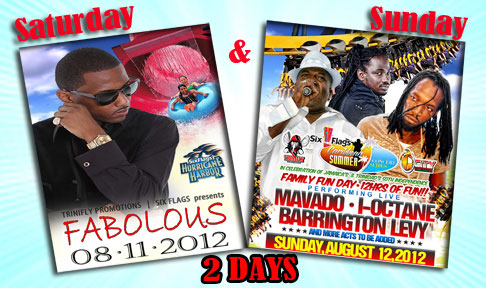 Hip-Hop veteran Fabolous (known for such hits as “Can’t Deny It,” “Throw It In The Bag,” and “Breathe”) has been tapped to join the already explosive show lineup for this year’s CARIBBEAN SUMMER CONCERT SERIES in August. Since 2001, Fabolous has staked his position as one of East Coast top MCs. Despite shifts in Hip Hop, Fabolous has also established himself as one of a few rappers who maintains massive crossover appeal and street-savvy persona. The Brooklyn rapper is expected to deliver an electrifying performance when he descends on the concert stage among thousands of music fans and sun seekers. Event goers will also enjoy Saturday’s exclusive “Soca Fusion” themed festivities from America’s largest water park, Six Flag’s Hurricane Harbor.

On Sunday, August 12, TriniFly Promotions and G-City Promotions partner together to round out the jam-packed weekend with extraordinary Caribbean flair, plus a sizzling lineup of reggae dancehall artists! Scheduled to take the stage will be dancehall favorite Mavado, legendary reggae singer Barrington Levy, dancehall sensation I-Octane and much more! On Sunday, the event also boasts all-day entertainment provided by some of the east coast’s hottest deejays, including Road International and Massive B.

Event tickets are currently available for purchase at www.caribbeanconcerts.com. Interested individuals should also visit the event website for official information on exclusive ticket giveaways and contest opportunities (including “Text For Tickets” Tuesdays and “Facebook” Wednesdays), special VIP packages and volunteer opportunities. Event updates will also be posted to www.facebook.com/CaribbeanConcerts and Twitter @CaribeanConcert.


ABOUT TRINIFLY PROMOTIONS
TriniFly Promotions was established for the sole purpose of bringing you musical gratification with a Caribbean twist. As one of the largest multicultural-based entertainment promoters, TriniFly Promotions LLC spans across five major east coast cities and has an international presence in four countries. TriniFly Promotions represents every island, as we are all united. The various genres highlighted throughout the Caribbean community are what we accentuate, bringing you a bit of everything that your imagination can grasp. From Trinidad and Tobago to the Virgin Islands, this promotion is dedicated to giving all of our supporters maximum enjoyment, by all means necessary.