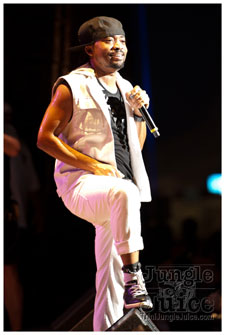 Machel Montano and friends invaded Jones Beach for the first ever Caribbean Fest and this was another one for the record books for Mr. HD.  West Indians made the pilgrimage and the show did not disappoint.

CROWD:
Decent size crowd as the theatre definitely was not an esay space to fill but we came out in numbers and made it feel like a packed house.

VIBES:
Though there was no real alcohol to speak of as I was informed by the workers that no hard liquor is sold on the premises, we still managed to show Jones Beach the decorum West Indians possess.  Baby Cham featuring O, I Octane, Mr. HD featuring Patrice Roberts, Farmer Nappy and Kerwin DuBois kept the crowd energized and we forgot that we were not inebriated.  The icing on the cake came when Mr. HD introduced the future of soca music lil Devin who helped him close out the show.

FOOD/DRINKS:
Hot dogs, cheese fries and pretzels were some of the finger foods supplied to the patrons that were for sale as well as frozen drinks, beer and wine.  But you know we had to add a little flair to represent our culture.  Though we missed it by a hair, we saw Super Wings serving up tasty wings and things along with a coconut vendor quenching thirsts with coconut water.

SERVICE:
In VIP, the line for the bar was not ridiculous as I gather most people were confused to find out there was nothing stronger than beer and wine to consume.  But when in Rome we do as the Romans and drank enough wine and beer to sustain us for the show and the staff were very pleasant towards us and served with a smile.

COST/VALUE FOR MONEY:
Its safe to say that VIP patrons might've gotten the short end of the stick depending on what perspective you are looking.  You could've only drink in VIP and the distance from the stage if you wanted to remain in there was very distant, though the promoters were thoughtful enough to have a projector screen to view from.  General admission, now that is where you wanted to be, front and center and stage access from every angle and where you felt you got the best value for your money.

Definitely a new experience for Soca music going to Jones Beach and a great step for the culture, but if the security were a bit more lenient towards party goers and allowed access beyond VIP with drinks, the vibes would've been undescribable.  Foreign Bass, Mr. HD and friends gave a high energy show that made us proud to be West Indians.