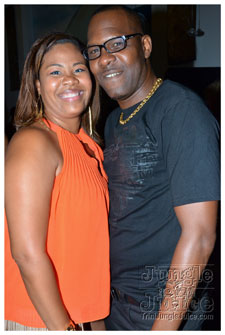 As we pulled up, someone came to our car and said, "Good day Sir, welcome to Climaxx." Limerz International were not playing this year one bit. Valet service for vehicles? Well I guess it was appropriate considering it was held at a mansion. And as the TJJ team entered, like anyone else on the night, we were greeted by two beautiful ladies at the door who were sure to direct us to the bar and the dance floor ... Nice!!

CROWD:
By Climaxx's standards, the crowd was as usual... sexy, well dressed, latest wears etc. As for size, they expected 250 persons, but there was by far alot more than that ... close to 500 maybe. Even Soca sensation Benjai was at the spot taking in the scene with a ganster lean. Allyuh know how the Jai rolls!

VENUE?ACCESSIBILITY:
The location of the mansion was good, close to downtown but not too far from everything else. The ambiance was exceptional, including the semi-indoor pool. A plus for us this year was the temperature. The venue was cool throughout, possibly because the ceiling was so high, it allowed the cool air to circulate. At the same time, considering the number of people, I think they need to find a new spot ... it started to get a bit tight up in there.

VIBES:
The vibes always nice in Climaxx ... from the get go, the music was spot on. And I am not sure how else to say it but DJ Private Ryan is probably one of, if not the best DJs around. With DJ Renee and Hummingbird kicking things off, Climaxx had the right mix of music. The energy was electrifying to an extent. The place was lively from start to finish.

FOOD/DRINKS:
There was a bit of finger food by aunty Kathleen... not bad at all. However, you know what happens when you give Trini's a taste of good food .... they want more! Lymerz, we need have a little more food there guys. As for drinks, with the chit system in place, drinks were flowing (of course to the strength of your dollar). And if yuh give trouble, Ms. Lauren would put you in place as she had the bar by the pool on lock.

SERVICE:
The service was good. Lymerz did their best to take care of their patrons. Smiles were in abundance depicting total satisfaction of the night's events.

COST/VALUE FOR MONEY:
The initial ticket cost was $25.00 for earlybird tickets. At the door was $40.00. Considering the location, the DJs, the valet service... we think it was worth it. Again, We can see bit more food, but no problem...

After all is said and done, Climaxx was a party to be at. It was well organized, things were in place and the party goers had a great time. Soca music flowed just like the stream like semi-indoor pool. We are looking forward to Climaxx 2013 for sure.