By TJJ Admin
Published on 19-Jul-12
(JULY 19 2012, NEW YORK, NY) On July 25, 2012, patrons will have the opportunity to sample a plethora of traditional and nouveau Caribbean cuisine at RESERVEDnyc. Hosted at Studio 450 in Manhattan, a gorgeous penthouse with stunning views of New York City, RESERVEDnyc is the second installation of ... 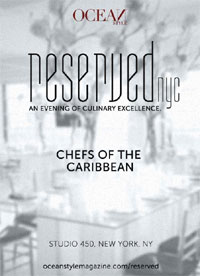 (JULY 19 2012, NEW YORK, NY) On July 25, 2012, patrons will have the opportunity to sample a plethora of traditional and nouveau Caribbean cuisine at RESERVEDnyc. Hosted at Studio 450 in Manhattan, a gorgeous penthouse with stunning views of New York City, RESERVEDnyc is the second installation of OCEAN Style’s RESERVED series. The event is designed to showcase the immense culinary talent that exists throughout the Caribbean. With ethnic influences from all over the globe, the Caribbean is one of the richest basins for visually stunning, elegantly crafted, sumptuous food with bold and piquant flavors that are unique fusion of several different elements.

Headlining the evening are 5 distinguished chefs from across the region, including Antigua, Jamaica, St. Lucia and the Bahamas.

Christophe Blatz is the Executive Chef at Curtain Bluff Resort on the island of Antigua. Cristophe trained under such notable chefs as Alain Ducasse and cooked in some of the finest Michelin star-rated kitchens in France including Les Ambassadeurs restaurant in the Hotel du Crillon Paris, Lous XV in Monte Carlo, La Pinede in St. Tropez and L’Aubergine in Germany. His background fuses French continental with Caribbean flavors and ingredients.

Kevin Broderick is the two-time winner of the Jamaica Observer's Chef of the Year Award. But before the awards, before catering for Hollywood celebrities like Whoopi Goldberg and designer Ralph Lauren, and before his nouveau Jamaica cuisine, Kevin learned to cook at the apron strings of his mother, grandmother and great grandmother. He is now the Executive Chef at Negril Spa Retreat.

Kingsley John has developed many successful concepts and worked in some of the best restaurants in New York, Chicago, Washington DC, Charlotte, St. Lucia and Anguilla including Aquavit, and later Riingo, under Celebrity Chef Marcus Samuelsson. He has also worked with numerous other world-renowned master chefs including Charlie Trotter in Chicago and participated at an event with Adria Ferran of El Bulli, Daniel Boulud of Daniel, Norman Van Aken and Gordon Ramsay.

Veejoruth Purmessur, a native of the East Indian island of Mauritius, has served up his inspired creations to a global audience, having plied his trade in several countries including Jamaica, the United States, the Bahamas, Mexico, New Caledonia and the Dominican Republic. After a brief detour back to Mauritius, he returned to Sandals Resorts International as Executive Pastry Chef at the Beaches Turks & Caicos Resort Villages & Spa where he continued to perfect his art. Chef Purmessur is constantly on the move, overseeing pastry departments at 20 hotels in five different countries, and training and developing his staff of nearly 200 aspiring young pastry chefs.

Sean John is a New York City-based chef, photographer, filmmaker and restaurateur. He was raised in Jamaica and Europe, and continues to incorporate his worldly perspective into all his endeavors. Continuing to draw from his creative inspiration, Sean decided to act on his long-held desire to open a restaurant that would fuse his passions for food, music and hosting. Spur Tree opened to rave reviews and has been featured in several magazines’ “best of” lists, including Maxim and The New Yorker.

OCEAN Style is also collaborating with former Miss Trinidad and PROJECT RUNWAY winner Anya Ayoung-Chee on RESERVEDnyc. A portion of ticket sales and silent auction proceeds will be donated to benefit her charity, The TallMan Foundation in Trinidad. The TallMan Foundation supports youth in Trinidad & Tobago by offering a wide array of Arts programs. Silent Auction items include limited edition autographed prints from Marc Baptiste and Johnny Vincent, Broadway tickets, garments from Catherine Malandrino, Calvin Klein and Anya’s own collection plus an amazing 4 day/3 night stay at Sandals Exuma Resort in the Bahamas.