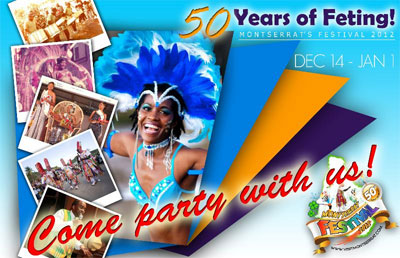 Dubbed Montserrat Festival 50, this year will be a homecoming for many nationals now living around the world, who were forced to migrate after volcanic activity began in July 1995.

"Our people abroad have said they are coming home in large numbers and we plan to make this festival not just memorable but one that will encourage them to return more often and to consider investing in our redevelopment," says Honourable Parliamentary Secretary Jermaine Wade, who has been given responsibility for pulling off this Jubilee celebration with the support of the Montserrat Festival Committee.

Montserrat's cultural festival began in December 1962 as an extension of the numerous activities that were celebrated across the island for Christmas but also to welcome home those who'd migrated to the United Kingdom and Canada for work.

Until today, hundreds make the annual trek home to experience among other things the traditional St. John's Day village festival on December 27, the masqueraders and string bands which are fixtures of Montserrat's festival. This December those numbers are expected to increase dramatically.

"We want people to tell us that they are coming even if they've already made reservations at local guesthouses and villas or staying with family and friends," says Project Officer with the Montserrat Tourist Board Rosetta West. "Our accommodation stock is not at pre-volcano levels and we want to make sure that everyone is taken care of so that they can have the best experience possible for our 50th celebration."

While events are still being added to the calendar, a preliminary list of activities have been released by the festival committee. These include both daytime and evening activities for the entire family, lots of community events, pageants and competitions to choose from.

"We don't want anyone to be left out," says Chairman of the festival committee Johnny Wyke. "Our programme has been expanded to offer workshops on making our national dish goat water, stone oven bread, a cake and wine show, village meet ups along with the popular calypso competitions, parades and queen pageants. There are also many private activities added to the calendar to cater to community groups and social clubs so that everyone can enjoy Festival 50."

The organisers of the Alliouagana Festival of the Word have shifted this fourth year's event from November to December 7 to 9 in order to take advantage of the expected increased crowds. The focus this year will be Caribbean films as well as launching new literary projects focused on commemorating Montserrat's 50 years of festival.

The Montserrat Secondary School Alumni Association will be hosting its second reunion, which includes a week of social and community events with funds raised donated to the local high school. Other charity events during the month of December are the mnialive.com charity hike and the Sir Howard Fergus Scholarship.

Popular events such as the Emerald Community Singers Show, Night of Pan, and the Regional Women's Calypso Show will join newcomers such as Soca Frenzy's international show, a 50th Gala to honour the former pageant queens and calypso monarchs and the village meet ups which will give residents of neighbourhoods now destroyed to congregate and reminisce while enjoying traditional string band music.

New Years Day festivities with mas bands reminiscent of festival days at Sturge Park look set to make a return this year, with more than 15 bands already registered. In recent years, the annual street parade has seen less than seven mas bands on the route. This year, several new bands will make an appearance including Waka Waka Mas band out of the United States with their Treasures of Alliouagana theme. Some sections of Island Diva Mas band have already sold out in their Rendezvous themed costumes. There will be several t-shirt troupes along with mas bands Flour People, A Bijou Production, Flower Garden, 50 Strong, Montserrat International Troupe and the Rotaract Invaders.

Full details on how to contact the mas band leaders to register or to add events and sponsor Festival 50 activities can be found on www.montserratfestival.com. Follow the progress towards Festival 50 on twitter @mnifestival.