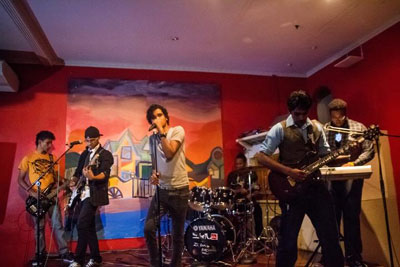 Project Override’s drummer Nicholas Thomas who is an avid sportsman, was really pleased by the thought of celebrating the Olympics. “We need to do more events like this. We have more than a dozen athletes competing in this year’s Olympics and whatever we can do to give them that moral support, would help them go a long way.” Nicholas was glad to learn from Paul Montano that the event would continue every Friday during the course of the Olympic Games and beyond.

Lead vocalist of Sunday9 Damion Phagoo was very happy that Project Override invited them to showcase their talent at the launch of Fanfare Fridayz. “Its a party with a difference!” exclaimed Phagoo. He too was very happy that the support for our Olympic athletes was being well represented at La Casa de Ibiza. “I am sure when Richard Thompson places first in the 100m, everyone would be rushing here to celebrate.”

Project Override would continue to have many shows throughout the July/August Vacation. Make sure to look out for them at the Annual Pop Music Awards 2012 at Space La Nouba, Make sure to check out Project Override on Facebook and on Youtube. You can email us at projectoverridepr@gmail.com