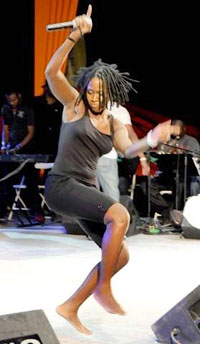 Port-of-Spain, Trinidad. July 30, 2012 -- Fay-Ann Lyons-Alvarez says the only thing that could possibly make the House of Marley concert any more amazing would be the appearance of Bob Marley himself on stage at the Hasely Crawford Stadium on August 30. Lyons-Alvarez, her husband Bunji Garlin and her father, living legend, Super Blue will perform at the anticipated concert event alongside the likes of Damian Junior Gong Marley, Kymani Marley, Stephen Marley and Julian Marley. “ This is history in the making. It’s phenomenal to actually be able to share the stage with the sons of Bob Marley on one night,” said Lyons-Alvarez.

House of Marley is a show that event organisers say is intended to take patrons away from the ordinary and into the realm of international standards where lighting, sound, stage and certainly décor will play an important part in setting the mood for a memorable showcase of Caribbean talent. Fay-Ann disclosed having performed with members of the Marley family on various occasions before. “I headlined a show in Washington with Junior Gong once and I performed with him again at another event. I also performed for the Basia Beat Breast Cancer concert in Trinidad two years ago, where Kymani Marley was on the cast as the headline act, so this will be a pleasure again, and more so now that we’re all going to be together for this great event,” she said.

Organisers of the House of Marley show have been reporting positively on ticket sales, this as patrons across T&T anxiously prepare for what is considered one of, if not the biggest event to be staged in Trinidad in 2012. Already, Fay-Ann and her soca family have assured that there will be a mixture of music that she said would essentially create an enjoyable repertoire for fans and music lovers. “The way we’ll be approaching this concert will be very different from what people are accustomed to seeing from us in Trinidad. We’re used to performing at Jazz festivals that feature a lot of big name artistes from across the world and when we do, we’re able to show off our diversity with a mixture of musical styles and cover tracks from other entertainers. Now, we’re getting a chance to do this at home- and we’re very excited to show the home crowd that we can deliver just what they need at an event of this caliber,” said the artiste.

The soca element of this concert is expected to deliver a truly momentous touch, as Fay-Ann will share the stage with her husband and father at the same time. “This is truly soca royalty and I’m really happy that we’re being given this chance to perform together in such a massive arena at home,” said Fay-Ann. Eager for the date to arrive, the soca superstar who has captured multiple road march titles says this is a concert that everyone should be a part of as the cast is one of the best she’s heard of for some time, in Trinidad. “ This concert will be memorable and I can guarantee that what we’re coming with, will leave patrons very happy at the end of the night.”

The House of Marley concert will feature three areas for patrons – those being General, VIP, which is closer to the stage and VVIP- the only area that will offer the closest view of the stage with free premium beverages and hors d’oeuvres throughout the night. The concert will also see the likes of several upcoming T&T entertainers of the reggae fraternity take the stage, among them, Collis Durante, Aaron Marquez, Orlando Octave and Derwin Vallie. Additional information on the concert is available at www.etceterabuzz.com.