By Neil aka Joy Juice
Published on 08-Jul-12
Allyuh....corn soup, doubles, lentils, bake, saltfish, orange juice, fruit punch, fruit bowl tamarind sauce and so on and so on....I'm sorry...but when we got the phone call at 8am and the menu was mentioned to us over the phone...we changed our mind about the 11am departure to the Ultimate Premiun Breakfast fete and left at ...
>> View Ultimate Premium Breakfast Party Gallery
>> View Houston Caribfest 2012 Coverage 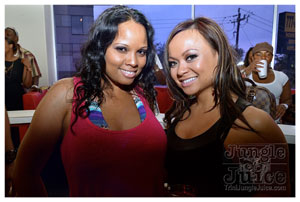 Allyuh....corn soup, doubles, lentils, bake, saltfish, orange juice, fruit punch, fruit bowl tamarind sauce and so on and so on....I'm sorry...but when we got the phone call at 8am and the menu was mentioned to us over the phone...we changed our mind about the 11am departure to the Ultimate Premiun Breakfast fete and left at 9am instead. That type of breakfast not going to last on the table too long with Trini's around! To our surprise though, there was enough food to share with all that was there and then some. So after everyone had their belly filled up, it was time to continue taking in the serious styles of 'Tony for Real,' a Houston based Trini DJ. They should call him DJ Real Styles...becasue de man boss...Tony then made way for the People's Champion, Benjai. With his only performance of the weekend, Benjai delighted the audience....You just had to be there to see it.

CROWD:
The crowd was a mixed one...young and aged....but all had 'Soca Appeal.' They were well dressed for a Sunday lunch type of setting. The place was not packed out but there was a decent number of supporters that gave it a ram out feeling.

VENUE?ACCESSIBILITY:
The venue was good. A bit far but still within the party circuit. The interior was ok...but the stage was a bit questionable. The layout was good. The venue remained cool throughout the evening. What was impressive was that there was a terrace for the smokers....so we..the people who love their lungs...could party in peace! The place was clean and well kept. No complaints there. I can see a few more events being hosted at the Avani Lounge! 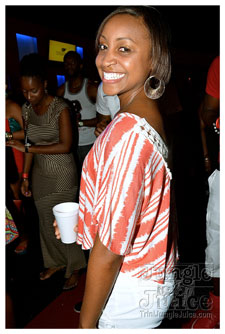 VIBES:
I believe that it is the DJ that makes the party....DJ Tony for Real thought out of the box that Sunday and brought back the Chinese Laundry, downtown outlaws, Dr. Hype, Howie T and Rhythm Nation days...the days when people bought the cassettes on the side of the street, the days you can go to a party and come out feeling that the girl you met, would be your wife....those type of days....! Talk about vibes! Then to top it off, Benjai did a hell of a job. He performed very very well, engaged the crowd, kept them involved and fulfilled his duty. He was backed by DJ Stephen who, as you know has made a name for himself by backing up artists. And when Benjai finished his hour long performance....Stephen took over and then DJ Hummingbird from Houston. The vibes was spot on at this event!

FOOD/DRINKS:
There was no question that the food was spot on. The breakfast was free with admission. There was a large variety of Caribbean dishes. The only thing that was probably missing was ovaltine, quick or lipton tea! The food's quality was really good...especially the tamarind sauce. And of course, everyone was excited when the club's owner gave away some CEROC. I guess at that point it was free drinks! Other than that, you had to support the cash bar.

SERVICE:
This event definitely had no long lines for food or drink. Well...only when the corn soup reach....but the guy handling it did a good job filling the cups. The 'Fall Out Crew' from Trinidad were by the door and greeted the guests...that was big....and the promoter Chris, did a great job in making sure everyone was happy. He even took the time to thank the audience for coming. This was really cool.

COST/VALUE FOR MONEY:
I do not think anyone complained about the cost of this event...$30.00, free breakfast, Benjai, Tony for Real, DJ Stephen and Hummingbird all on one ticket!

Overall, this event had one of the best vibes for the weekend. There is something special about a breakfast party...it could be the food, it could be the vibe, it could be anything...but breakfast fetes give off a type of vibe that usually cannot be copied. This was no different. The Lymerz crew was on the inside and so was the Fall Out crew. Nice seeing you guys. T-Roc...much respect.  The TJJ team had a great time there. Chris, great job overall. We looking forward to the 2013 already.