Wednesday On The Roof 2012 Review 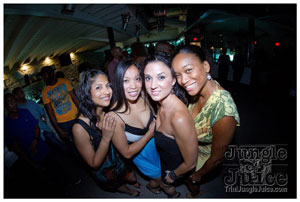 7 years and going strong. This event usually kicks off the Toronto Carnival  Week signalling the fact that the countdown has begun. There is a reason (2 actually) why West Indians would go to a fete in the middle of a work-week without any concern.
1. Is carnival week..and 2. IS CARNIVAL WEEK

For the last seven years Wednesday on the roof has legitimately been seen as one of the Major fetes leading up to the Toronto Carnival weekend. While the venues may have changed over the years the vibe remained the same as evidenced by the consistently large turnout every year.

Though not billed as a ""SOCA FETE"" per se there was and adequate number of sets that teased and reminded those in attendance what awaits them in the days to come.

JESTER CHIEF AND D""BANDIT  taunted the crowd with varying genres of music which they graciously received and appreciated after all it has been seven years and they know what the people want.

So if you were worried about waking up and going to work the following day after n event such as this one ....I strongly recommend  holding back one  of your vacation days specifically for this event it's definitely worth it.