By Jo-Ann aka Karamel
Published on 28-Jul-12
“Rain or Shine we got you covered” and so they did as we entered the rooftop of the Brooklyn Children’s Museum to a sea of umbrellas for ShorBlu’s Cocktails.
>> View Shorblu's Cocktails Gallery 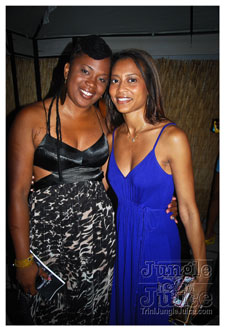 “Rain or Shine we got you covered” and so they did as we entered the rooftop of the Brooklyn Children’s Museum to a sea of umbrellas for ShorBlu’s Cocktails.

Uncertain as to how the turnout would be due to the constant rain during the day, we were pleasantly surprised to see a full house, everyone well dressed with cocktails in hand and ready to fete.  Because of the off and on rain, the set up was a little different, food and drinks were stationed on the inside of the museum.  This did make getting a drink a little difficult due to overcrowding in the small space designated for eats and beverages.  All the same, that did not stop patrons from  standing on line for specialty cocktails like “Pan Trin 69”, “Pimp’s Cup”, and “Dogg Bite” to name a few along with finger foods compliments of Taste of Tants.  And for those who do not indulge in cocktails there was an assortment of wine, champagne and of course scotch, vodka and cognac.  The boys definitely had every area covered. 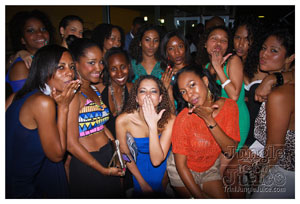 One would think the rain would spoil the vibe but with the lineup of Back to Basics, Sounds 4 Life, Commish and Pan Trin Vibes that was certainly not the case.  The dj dared the crowd to go palance in the rain and so said, so done.  It was no holds barred well at least in the back of the museum and yes there were even some people liking themselves in the rain with their umbrellas doing the 6:30.  With a good mix of music, cocktails, food and vibe we partied well past our curfew and left with a good buzz.  Thank you ShorBlu for inviting TJJ.