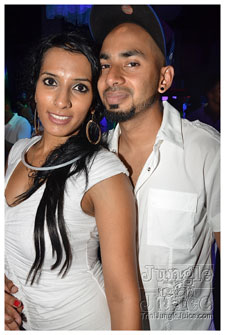 Island Style promotions once again did as expected ... put on a spectacular event. Outside of the Kool Haus, the lines to go into Glow were very, very long. Signs of things to come? You bet! What we could tell you is ... it was well worth the wait! Glow Toronto is a must attend event every year!

The event was a sold out as expected, and partygoers all listened to the instructions ... everyone, and I mean EVERYONE was dressed in ALL WHITE! The vibes was right up there. Glow Toronto has consistently met the demands of the people. This year, even Machel made an appearance at Glow, along with Farmer Nappy and Kerwin Du Bois.

By 4:30AM, to the displeasure of the crowd, especially the Trini's on hand, it was time for the show to end. But they found joy in playing music from their cars outside while eating corn soup, jerk chicken, beef & chicken patties and other foods provided by the vendors outside the fete. Machel was right ... a few years ago he sang a song who's catch phrase was, "How do you know de party sweet? ..... Vendors outside de StreeT!" I cannot remember exactly the name of the song, but by the numbers outside the dance ... the inside was obvious!

Ian and promotional team, great job. We inside in 2013! The question is, Will you be?