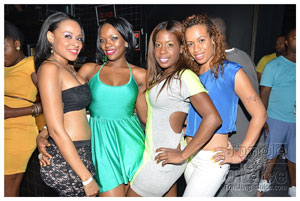 Known for their sunglasses wearing patrons, great vibes, top of the class line up of DJ's and large amounts of beautiful women and people in general ... the "Shine" name has grown in popularity. With a stamp already in New York and Miami, Shine Toronto has left their own mark ... with a huge print to say the least!

Patrons showed up by the thousands ... partied till the sun came up ... were served breakfast ... partied some more ... and walked away with their sunglasses on as the sun was shining! Along the way, Shine Toronto featured a cast of DJs that were unlike any other; Barrie Hype, Soca Sweetness, Lindo P, Natural Freaks, Sounds 4 Life and of course, D' Bandit and Back to Basics - who both do not need any introduction!

Along the way, Iwer George and Kerwin Du Bois both gave stellar performances. Iwer with his trademark spraying of water on the people and Kerwin captivating the audience with his rendition of "I Am Soca" never lost the attention of the 3000 strong crowd for one moment. Kerwin as usual was backed by DJ Stephen, and the formidable pair delivered!

As the event drew closer to the end, and on the announcement of last call, patrons had no fear or no need to be worried as Tasty's Restaurant served them with breakfast. What a treat! Currant rolls, sweet bread, pholourie just to name a few. And by the way, the food was not just good ... it was outstanding!

Throughout the event, there was a really good vibe at Shine. Though the crowd was a bit young, everyone had a great time. The promoters did a great job on the evening managing the huge stage and large cast of DJs without any problems. We also appreciate the love they gave TJJ as well.

Overall, Shine Toronto 2012 was a complete success. Thanks to D' Bandit and to Back to Basics for their love. Big up DJ Stephen, Kerwin and Iwer. And by the way, check out the "I Am Soca" license plate in the photos! Guess who's?