Josha Boodram of Project Override Advocates for the Environment 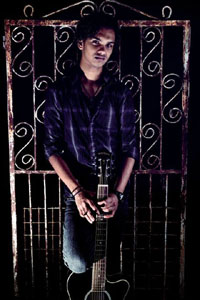 Port of Spain, Trinidad. August 4th, 2012 - Lead vocalist of the band Project Override, Joshua Boodram launched his first song that advocates for the environment. Joshua sang powerfully at the 2nd National Youth Forum on Climate Change (NYFCC) at the Crowne Plaza Hotel, Port of Spain last Saturday. He was well received by the Honourable Ms. Ramona Ramdial, Minister of State in the Ministry of the Environment and Water Resources, as well as the many youth climate change delegates that were present at the forum.

The song ‘Take the Wheel’ can be described as an alternative groovy mix. It illustrates the steps needed to be taken by young people in order to mitigate and adapt to the effects of climate change. While the song does speak about environmental consciousness, it also speaks about young people uniting and becoming an unstoppable force.

Joshua Boodram was very happy to have written the song for the NYFCC, “I consider it an honour that they. approached Project Override to make a theme song for the forum. Climate change is a global issue, and it affects us all!” stated Joshua. Linda Hutchinson-Jafar of the NYFCC and Earth Conscious Magazine was highly impressed with Joshua’s performance. “It was great. I really enjoyed it. He is a great vocalist.”

Also making an appearance at the NYFCC was Project Override’s musical partner, local pop singer John Tho. He sang two of his latest releases ‘With You’ and ‘Free Fall’. “It’s really great that Project Override and I shares similar concerns for society, and as budding musical artistes, we should send meaningful and positive messages.”

Project Override would continue to perform at many events throughout the July/August vacation and beyond. Please make sure to check them out on Facebook and on Youtube. You can also email them at projectoverridepr@gmail.com