Bronze for Lalonde in Olympic 400m 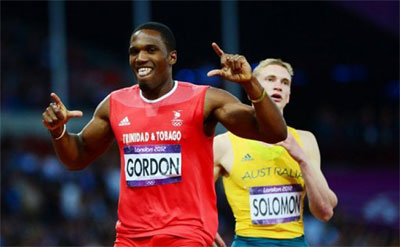 Trinidad & Tobago’s Lalonde Gordon has won bronze in a new Personal Best (PB) of 44.52 in the 400m at the 2012 London Olympic Games. The 23 year old from Lowlands, Tobago blasted through the first round of the event and won his semi-final in a PB of 44.58. In the final, Lalonde was up against the reigning World Champion, Grenadian Kirani James and the veteran Chris Brown from the Bahamas.

Speaking from London, an elated Minister Anil Roberts said Lalonde’s race was perfectly executed and he showed that one should never discount an underdog. Minister Roberts also hailed the Tobagonian athlete as a revelation and testament to dedication and sacrifice. Minister Roberts said, “Athletics is the sport that has brought the most glory to our country at the Olympics, so it is fitting that our first medal at the 2012 Games would be earned on the track. I hope the progress Lalonde has made, improving his PB twice over three races, serves to inspire us all to better our own performances in life and in sport.”

Lalonde Gordon becomes the second Trinidad & Tobago national to medal in the Olympic 400m. The first was Wendell Mottley who won silver at the 1964 Tokyo Olympics.

Minister Roberts was also high in praise for the 400m Olympic champion Kirani James from Grenada who has become that Caribbean island’s first Olympic medallist. Roberts said, “Grenada is the smallest country ever to win an Olympic medal and the fact that it came from a 19 year old is no surprise. Kirani has dominated this race ever since he came on the scene as a junior. This bodes well for track and field development in the Caribbean, continuing to make the region a force to be reckoned with.”

--Statement from the Honourable Anil Roberts, Minister of Sport