LIME TV Customers Enjoy Sports Whenever, Wherever With ESPNPlay.com 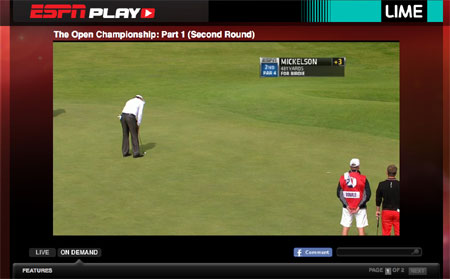 St. Lucia – August 8, 2012 – LIME TV customers in St. Lucia now have another medium to access sports online whenever and wherever they wish: via ESPNPlay.com on a PC, tablet or mobile phone. Customers can access ESPNPlay.com free of charge at www.espnplay.com by selecting the LIME icon, or by logging onto limetv.com.

With ESPNPlay.com, fans can toggle between events in a main viewing window, and with a single click, jump to another event. Video can be expanded to full screen or reduced to a compact size. The site also has a pop-up window.

ESPNPlay.com features live online sports viewing from a broad array of global events, including cricket, football, tennis and baseball. Some games are available live while others are broadband-enhanced versions of games from ESPN Caribbean’s two TV networks.

In many cases games and events are available for replay varying from 24 hours to more than a week after the original airing, depending on the sport. Also, ESPNPlay.com presents live games and events not available on ESPN’s Caribbean television networks, such as additional NCAA basketball games, including the NCAA Men’s Basketball Championships; additional Europa League and Bundesliga football games; extra courts for all Grand Slam tennis tournaments and extra holes for Golf Majors such as the British Open, The Masters and U.S. Open. Also available are additional American college football and Canadian Football League games.

LIME Head of Marketing & Communications, Laurencia Cadette, said, "Our goal is to help LIMETV customers stay connected to their favourite sports programs by enabling them to access those broadcasts through a variety of mediums anytime they wish, from anywhere. That’s why we’re so focused on innovation and service enhancement, because we want every LIME product they use to be a great experience.”

Bernard Stewart, Vice President and General Manager, ESPN Caribbean and Maritime, said, “We are delighted that LIME is expanding its distribution of ESPNPlay.com to its subscribers in St. Lucia. With ESPNPlay.com, sports fans can watch the programs they want to see when they want to see them. ESPNPlay.com underscores ESPN’s commitment to providing a tailored programming line-up for the Caribbean market and 24/7 access to that programming with a click of a toggle.”