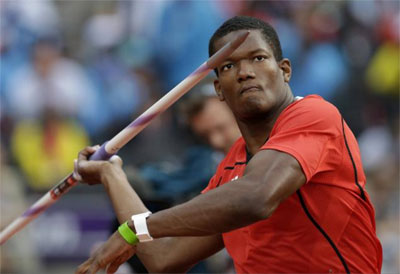 On a stormy Saturday afternoon in Trinidad & Tobago, our citizens were witness to history at the London Olympics as 19 year old Keshorn Walcott became this country’s second gold medallist. Keshorn set two National Records in the Javelin Throw final, launching the spear 84.58m on his third throw. That mark stood for the duration of the competition which featured much older and more experienced throwers.

The Toco-born Walcott, whose brother Elton is a national triple jumper, is coached by Cuban Ismael Mastrapa, an athlete/coach development officer at the Sports Company of Trinidad and Tobago. Responding to the international triumph, the Honourable Anil Roberts, Minister of Sport was ecstatic about Keshorn’s achievement.

“Amazing, astounding, spectacular...there aren’t enough adjectives to describe what this young man has done for Trinidad and Tobago. We recognised Keshorn’s talent from early. He was first spotted two years ago at one of the Ministry’s Rural Sport Caravans. Since then, we have been observing his progress, assigned the best coach to develop his raw talent and we’re pleased to see Keshorn’s emergence as an athletic phenomenon and now Olympic gold medallist! Keshorn has fulfilled his potential and exceeded the expectations we all had for him to succeed. The government will ensure that he is rewarded appropriately and continues to improve at his craft because at his age, the best is yet to come.”

At nineteen years old, Keshorn Walcott is the youngest gold medallist and the first athlete from the Western Hemisphere to medal in the javelin event in 40 years. The Javelin Throw is traditionally dominated by Europeans but Trinidad and Tobago can now boast of having broken that tradition, creating a legacy of which the country can be justifiably proud.